The Emma Maersk’s Wartsila-Sulzer RTA96-C turbocharged two-stroke diesel ship engine is the most powerful and most efficient prime-mover of super ships in the world today.

The RTA96-C is the largest engine in the world and is available in 6 through 14 cylinder versions, all are inline engines. These engines were designed primarily for very large container ships but similar large diesel engines run large ships of all kinds. Ship owners like the combination of a  single engine and single propeller for reasons of efficiency and cost of production vs operation of these mega-vessels. As ships continue to get larger with new generations of larger container ships being built each year shippers like Emma’s owner, A.P. Møller – Mærsk, will need a bigger engines to propel them.

To help relate to the size of this monstrous engine consider that one cylinder bore alone is just under 38″ and the stroke is just over 98″. And the alone engine weighs in at 2,300 tons and is capable of delivering 109,000 horsepower.

The following photos are from Aioi Works of Japan’s Diesel United who built the first engines for Emma and her sister ships. 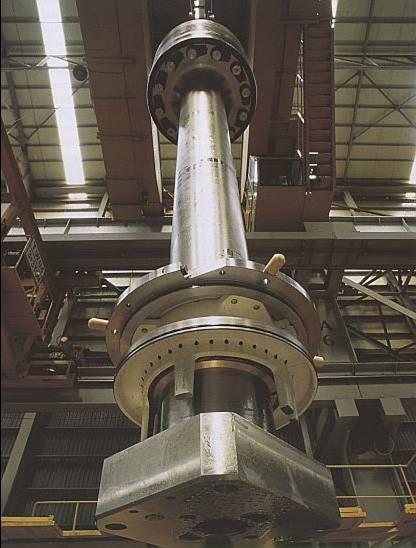 The largest piston in the world! 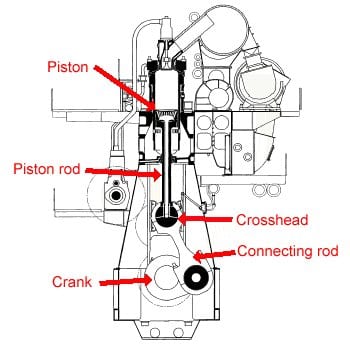 So you’re wondering what this behemoth powers… right? Nothing less impressive than the Emma Maersk as she looks from the sky.

A Comparison of the

World’s Largest Ships (from the Wall Street Journal) . We hate to tell the world’s premier business newspaper they forgot one… but they did. Larger than Emma Maersk is the The Ultra Large Crude Carrier (now a FPSO) Knock Nevis... formerly known as Seawise Giant, Happy Giant, and Jahre Viking.

Think that’s impressive…. what if she ever caught fire??

SHE DID: Emma Maersk Fire

For more horsepower check out our previous ship’s engineer posts:

This website uses cookies to improve your experience while you navigate through the website. Out of these, the cookies that are categorized as necessary are stored on your browser as they are essential for the working of basic functionalities of the website. We also use third-party cookies that help us analyze and understand how you use this website. These cookies will be stored in your browser only with your consent. You also have the option to opt-out of these cookies. But opting out of some of these cookies may affect your browsing experience.
Necessary Always Enabled
Necessary cookies are absolutely essential for the website to function properly. This category only includes cookies that ensures basic functionalities and security features of the website. These cookies do not store any personal information.
Non-necessary
Any cookies that may not be particularly necessary for the website to function and is used specifically to collect user personal data via analytics, ads, other embedded contents are termed as non-necessary cookies. It is mandatory to procure user consent prior to running these cookies on your website.
SAVE & ACCEPT
{"Tags":["Active Archive","Chief Engineer","containerships","Emma Maersk","Engines","Interesting","largest ships","Maersk","Marine Technology","marine-engineering","photos","Ship Design","ship engines","Ships","Wartsila","world-record"],"Categories":["Engines","Interesting","News","Photo","Ship Design","Uncategorized"],"Excerpt":"A look \"under the hood\" of the World's Largest container ship ever built. The engine that powers the Emma Maersk."}