What secrets do ship engines hold? Driving the world’s largest ships are powerplants that deliver serious horsepower. These modern ship engines vary in design and use but they all provide the brute force necessary to move monster ships through monster waves. Let’s take a look at a few of the most impressive.

When cost of fuel is less important than power and available space the gas turbine has no equal. Powering naval ships worldwide gas turbine engines let you feel the acceleration of a boat while conning a ship. But naval applications are not alone in the use of gas. The turbine’s lack of noise and space saving design make them idea for use on large cruise ships where they can be placed in tight spaces far from passenger cabins.

We choose the LM2500 for the sheer number of these units installed aboard ships, well over one thousand at last count. Providing background about the LM2500 General Electric, the turbine’s manufacturer, Tells us: 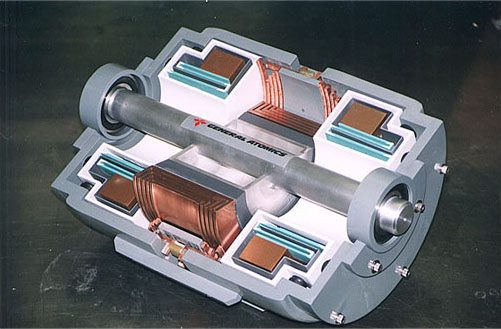 The Superconducting DC Homopolar Motor pictured above has a big name but an even bigger purpose. While ships are already incredibly efficient compared to all other modes of transportation the merchant fleet still has yearly carbon dioxide emissions equal to the emissions of 130 million to 195 million cars. Of course they carry more cargo than trucks and cars but there is room for significant improvements in emission reduction.

This motor is one part of General Atomic’s hybrid marine propulsion system they are currently testing for the US Navy. They tell us:

Diesel engines are the workhorses of maritime transportation while gas & nuclear turbine technology propelling nearly all naval combatants. The reason is speed vs cost. Operating a large diesel engine requires less fuel and larger amounts of horespower for long ocean transits. But what if you want the economy of a marine diesel for extended voyages but need the speed of gas turbines when operating close to land? This is the problem faced by designers of the Queen Mary II. Their decision? Combine the two systems into the hull of one ship a system called Combined Diesel And Gas  or CODAG for short. Wikipedia tells us:

Thrust is provided by four Rolls-Royce Mermaid podded propulsion units, each featuring one forward-facing low-vibration Kamewa propeller with separately bolted blades. (Queen Mary 2 carries 8 spare blades on the foredeck, immediately forward of the bridge screen.) The forward pair are fixed, but the aft pair can rotate through 360°, removing the need for a rudder.

As in most modern cruise ships, Queen Mary 2′s propulsion machinery is electrically decoupled from her propeller shaftsand her propulsion arrangement can therefore be more accurately described as “CODAG-electric” (by analogy with turbo-electric and diesel-electric). The diesel engines and gas turbines drive electrical generators, which provide the power to drive four 21,500 kW (28,800 hp) Alstom electrical motors located inside the podded propulsors (and thus entirely outside the vessel’s hull). 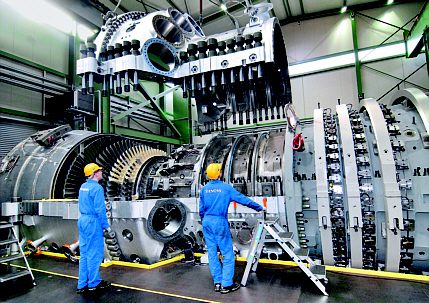 With 340 Megawatts of power, advance control systems and a myriad of parts the largest (and unamed!) gas turbine is missing only one thing, a ship! That’s right, this powerhouse was built for a powerplant in Germany but considering it’s size and weight there is no reason it couldn’t be repurposed for marine propulsion… well no reason except what ship would need that much power? Siemens tells us:

Residents of the town of Irsching in Bavaria, came out in droves this year to witness the traditional raising of their white and blue maypole. Three weeks later, they appeared in droves again ”this time out of concern for the pole, as an oversized trailer had shown up carrying a new turbine for the town’s power plant. The residents were worried that the turbine, which measured 13 m in length, five meters in height, and weighed 444 t, could pose a threat to their beloved maypole.

The world’s largest turbine, which was built at Siemens Power Generation (PG) plant in Berlin, traveled 1,500 km to get to Irsching ”initially by water along the Havel river, various canals, the Rhine, and the Main. It then went down the Main-Danube Canal to Kelheim, where it was loaded onto a truck for the final 40 km. This odyssey was undertaken because the only way to truly test such a large and powerful turbine is to put it into operation at a power plant. Read More.. The Wartsila-Sulzer RTA96-C turbocharged two-stroke diesel ship engine is the most powerful and most efficient prime-mover in the world today. The Aioi Works of Japan’s Diesel United, Ltd built the first engines and is where some of these pictures were taken.

It is available in 6 through 14 cylinder versions, all are inline engines. These engines were designed primarily for very large container ships. Ship owners like a single engine/single propeller design and the new generation of larger container ships needed a bigger engine to propel them. The cylinder bore is just under 38â€³ and the stroke is just over 98â€³.

Just sure not to miss our post showing photos of the world’s largest engine. Sure the world’s largest engine is impressive but today’s most technologically advanced vessels, like Pride International’s new P1000 class of Drillships, make use of advance dynamic positioning systems to automate some of the most difficult shiphandling techniques like remaining stationary at sea. To power these new monster’s of the drilling world you need multiple propellers that can rotate 360 degrees to pivot the ship on demand. Since the largest engines are direct drive this solution would not work for ships like the Deep Ocean Ascension wich is outfitter with Six Rolls-Royce 5.5 MW thrusters.

The Wärtsilä 32 engine reached an important milestone in March as the 6000th engine rolled out of the Wärtsilä factory in Vaasa, Finland. This popular engine, which is efficient, has low emissions, and is able to run on various liquid fuels, has stayed at the top of the industry thanks to long-term product development. The engine still attracts new customers worldwide both in the marine and energy industries. Moreover, most of the engines built 30 years ago are still in use

Looking to add a free gCaptain shirt to your wardrobe? Identify the following ship engine photo in the comments section and you may qualify to win. One note.. be sure to provide supporting evidence because I don’t have the answer. Good luck!