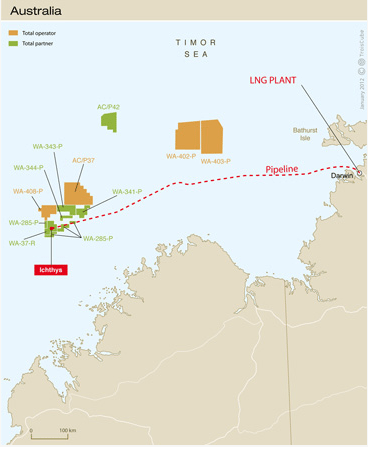 Total and its joint venture partner INPEX Corporation today announced that they have taken the final investment decision for the Ichthys liquefied natural gas (LNG) project in Australia, representing an investment of US$34 billion dollars. Total holds a 24% interest in the project which will develop approximately 3 billion barrels oil equivalent of reserves, including around 500 million barrels of condensate. First production is expected at the end of 2016.

“Through this project, Total further increases its presence in Australia and its access to the Asian LNG market, the fastest growing market offering high-value prices,” said Yves-Louis DarricarrÃ¨re, President of Exploration & Production, Total. “Total and INPEX have a long and successful history of working together all around the world. We are delighted to launch this world-scale project and to support it with our technical expertise and our best-in-class competencies in the management of very large projects.”

At the announcement in Darwin, INPEX Chairman Naoki Kuroda comments:

“The Ichthys FID announced today by INPEX and Total signals the start of construction of one of the world’s largest LNG facilities based on an estimated 40 years of gas and condensate reserves from the Browse Basin offshore Western Australia.  In delivering this important Project into production we will be securing vital long-term energy supply to Japan and our other customers while delivering sustainable economic and social benefits across Australia.”

Mr Kuroda said the Ichthys LNG Project was the cornerstone in the company’s growth strategy into the 21st Century and would be the first time INPEX was leading such a world-scale project as operator.

The Ichthys project consists of the development of the Ichthys gas and condensate field offshore North West Australia (lying in 260 metres of water depth) and the construction of an 889 kilometres gas transmission pipeline together with an onshore LNG plant near Darwin in the Northern Territory.

The offshore facilities will consist of a subsea well development connected to a central processing facility (CPF) for gas treatment and a floating processing, storage and offloading (FPSO) vessel for condensates. The CPF and the FPSO will both be one of the largest in the world.

INPEX confirmed contracts to be awarded for the major offshore work packages, including:

Notably, the entire annual production of LNG from the Ichthys project (8.4 million tons per year) has already been sold for 15 years under oil-linked price contracts, mostly directed to third-party consortiums of Taiwanese and Japanese buyers including INPEX. Total Gas & Power Limited, the gas trading subsidiary of Total, will also purchase 0.9 million tons per year of LNG from the project to supply directly its customers.

The plans for development and operation of the Ichthys project have been approved by Australian authorities, and construction will commence in the second quarter of 2012.  Mr. Kuroda said all successful tenderers to the Ichthys LNG Project in Australia had to demonstrate how they will maximise the use of Australian products and services.

“Ongoing compliance and reporting mechanisms will ensure contractors perform to the standards set by the Ichthys Project’s approved Australian Industry Participation plans and contractual obligations, Ichthys will truly be an international collaboration. An estimated 3000 jobs will be needed in Darwin during the peak of construction with a further 1000 offshore. Once the Project is in operation we will require approximately 700 permanent positions.” Total Exploration and Production in Australia

Total E&P has been present in Australia since 2005 and has interests in nine offshore exploration licenses – four of which it operates – in the Browse, Vulcan and Bonaparte Basins on the northwest shelf.

In addition to the Ichthys project, Total has, in Queensland, a 27.5% interest alongside Santos, Petronas and Kogas in the GLNG Coal Seam Gas to LNG project launched in early 2011. The GLNG project consists of the development of coal seam gas fields, the construction of a 420 kilometres gas transmission pipeline and of a liquefaction plant of 7.2 million tons per year. First LNG will be delivered in 2015.

Total is a leading producer in the LNG sector, with strong and diversified positions along the LNG chain. Total is active in most of the major LNG producing regions as well as main LNG markets and continues to develop LNG as a key component of its growth strategy.