First of all, any seaman, military or commercial, can tell you there is no heckler known as the “Filipino Monkey“. Rather it’s a phrase that’s been uttered anonymously by thousands of mariners for decades. This harassing radio call with racial origins is made over the radio when a sailor hears the distinct accent of a Filipino mariner on the VHF radio.

Why you may ask?

Mostly out of boredom but also for the simple reason that it is sure to get a heated response.

It also happens to be the bane of every Watch Officer’s existence; a joke that is no longer funny but refuses to die. Tim’s Times gave us the details behind this heckle back in September 2008:

The two tone alarm has gone again and this time it’s a pan pan from La Coruna Radio, other side of the Bay of Biscay. You wouldn’t mind so much if it was just the official users of VHF and MF radio that you had to contend with, but oh no there is every manner of animal sound, and jungle noise on the VHF from people who should not be on the radio, let alone a ship. One moron was calling out, “Gorilla from Manila, and Filipino monkey” my watchman who is from Manila laughed and said that it is often Indian’s who call this out to provoke a response from Filipinos, who say “Indian I can’t see you, but I can smell you”. So childish and these guys are in charge of ships, frightening, and these days it is all being recorded, so you must be dealing with stupidity, says a lot for the profession…. Indeed, the voice in the audio sounds different from the one belonging to an Iranian officer shown speaking to the cruiser, USS Port Royal over a radio from a small open boat in the video released by Iranian authorities. He is shown in a radio exchange at one point asking the U.S. warship to change from the common bridge-to-bridge channel 16 to another channel, perhaps to speak to the Navy without being interrupted…

“For 25 years there’s been this mythical guy out there who, hour after hour, shouts obscenities and threats,” he said. “He could be tied up pierside somewhere or he could be on the bridge of a merchant ship.”

And the Monkey has stamina.

“He used to go all night long. The guy is crazy,” he said. “But who knows how many Filipino Monkeys there are? Could it have been a spurious transmission? Absolutely.” 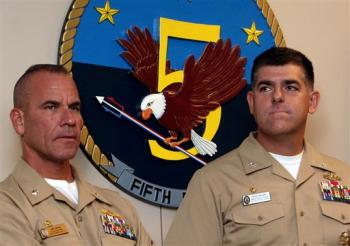 Initially I was shocked that a Navy ship, or any ship, could not have known the taunt was a joke. This is seamanship 101. I clearly remember having the taunt whispered in my ear by an upperclassmen during my plebe year that the Naval Academy and by the time I received my officers license I had heard it hundreds of time. How could the officers of the cruiser Port Royal not know this was a common joke? I’m admitting still confused but after hearing the audio file I must say it doesn’t sound like the typical ‘Filipino Monkey’ taunt.

I’ll give the last comment to the cruise ship captain quoted by the Navy Times since it’s both accurate and contains good advice to mariners:

“It was just a gut feeling, something the merchants did. Guys would get bored, one guy hears it, comes back a year later and does it for himself,”

The former skipper noted that he warned his crew about hecklers when preparing to transit Hormuz. “I tell them they’ll hear things on there that will be insulting,” he said. “You tell your people that you’ll hear things that are strange, insulting, aggravating, but you need to maintain a professional posture.”

A civilian mariner with experience in that region said the Filipino Monkey phenomenon is worldwide, and has been going on for years.

“They come on and say ‘Filipino Monkey’ in a strange voice. They might say it two or three times. You’re standing watch on bridge and you’re monitoring Channel 16 and all of a sudden it comes over the radio. It can happen anytime. It’s been a joke out there for years.”

While it happens all over the world, it’s more likely to occur around the Strait of Hormuz because there is so much shipping traffic, he said.

You can watch the Iranian video at EagleSpeak.