Maersk Line – How Do Ships Ride Out Storms Like Hurricane Sandy? [INTERVIEW]

[vimeo]http://vimeo.com/52383530[/vimeo] Steffen Conradsen, Head of Global Execution at Maersk Line, the world’s largest containership owner, gives us some insight into the decision-making process when ships encounter storms like Hurricane Sandy....

As Hurricane Sandy moves up America’s northeast coast, most ships are now operating under the direction of shipping company emergency response plans and United States Coast Guard directives. But owners... In the words of the great John Bossie “Mother Nature and the Sea are extreme forces that must be respected at all times.” Here are some videos that illustrate the... What is the Mariner’s 1-2-3 Rule and Should it Be Updated?

By Fred Pickhardt, With two named tropical storms already on the books before the official start of the 2012 hurricane season I wanted to review what the Mariner’s 1-2-3 Rule... What’s the Worst Sea-State You’ve Ever Been In?

We asked the question this evening on our Facebook page and thought you all might be interested in seeing some of the responses… What’s the worst sea you’ve ever been in?... JEAN LAFITTE, Louisiana—The center of Tropical Storm Lee stretched across the central Gulf Coast early Sunday, dumping torrential rains that threatened flooding in low-lying communities in a foreshadowing of what... (Dow Jones) Anadarko Petroleum Corp. (APC) said Wednesday that it has removed nonessential workers from the company’s Gunnison, Nansen and Boomvang oil platforms in the Gulf of Mexico as a... image (c) Liam Beswick This is the South Atlantic (almost) at its most unforgiving as the “Fortress of the Sea” ploughed west for the Falklands from South Africa. (ROYAL NAVY)... 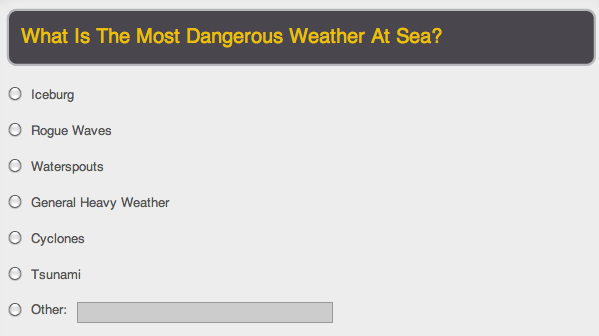 Poll – What is the most dangerous weather condition at sea?

[polldaddy poll=”919366″]   Do you have a story about severe weather? Be sure to leave your comments below! Also, Check Out our previous maritime poll questions.

Shown here, 3 lifeboats carrying some of the 64 students and crew that were rescued after the tall ship Concordia sank 344 miles off the coast of Rio de Janiero...

It’s been a bad week for lifeboats, once termed ‘the Pinto of the seas’. Over at Maritime Accident Casebook three incidents during drills and training have come to light, two...