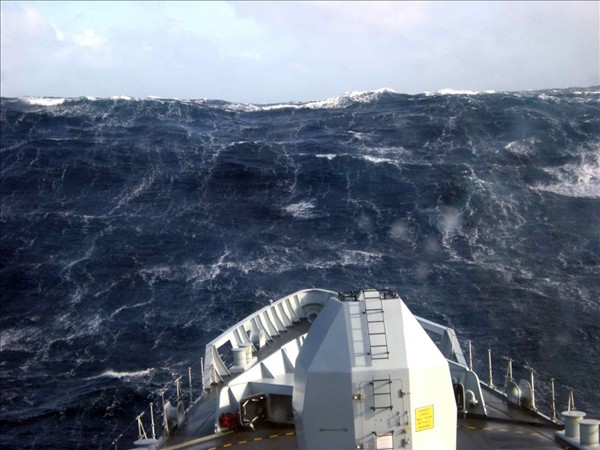 This is the South Atlantic (almost) at its most unforgiving as the “Fortress of the Sea” ploughed west for the Falklands from South Africa.

(ROYAL NAVY) The Portsmouth-based destroyer faced some mountainous seas on the 4,000-mile passage from Cape Town to Mare Harbour, her base for the next five or so months as she patrols Britain’s South Atlantic territories.

We’re told that all aboard the Type 42 suffered at the hands of Nature, but Lt John Jackson steadied his nerve to capture this wall of water seen through the bridge window.

It was a far cry from the rather benign weather the ship experienced in Cape Town where even in the depths of the austral winter, it’s typically in the mid-60sËšF by day.

Aside from giving her ship’s company a break after a lengthy sail down the West African seaboard, the chief reason for the visit to South Africa’s famous port was to support British defence firms at a trade and industry day.

The companies used the destroyer as the backdrop for their displays and demonstration of their products to members of the South African Armed Forces and government.

Meanwhile, one fifth of the ship’s company made the 20-mile trip to Simon’s Town, home of the South African Navy, who were holding their Navy Winter Sports Day.

Edinburgh’s sailors were invited to take part in six events, including basketball, rugby and netball.

Honours were even between the two nations as each was victorious in three of the disciplines.

There were also opportunities for Edinburgh’s sailors to explore the Western Cape, including climbing Table Mountain and the (strangely) popular winemaking region of Stellenbosch.

“Cape Town has a long history of supporting vessels on lengthy ocean passages and I was glad to see that the welcome is as warm as ever,” said Edinburgh’s Commanding Officer, Cdr Paul Russell.

“The Royal Navy also has an historic association with the South African Navy and it was great to be able to reaffirm those links as well.”

The ship’s now safely in the Falklands where temperatures are just above freezing and the wind is, as ever, relentless.

When her duties in the Falklands and South Georgia are done, Edinburgh will carry out a number of high-profile visits in South America, the Caribbean and the USA, before sailing home to Portsmouth in time for Christmas.