By Liz Lee (Reuters) Facebook, Google, Microsoft, and Amazon are seeking to meet Malaysia’s prime minister to ask that foreign vessels be allowed to repair undersea cables in its waters,... Rolls-Royce has signed a deal with Google to gain access to the tech giant’s intelligent awareness systems to help make existing vessels safer and eventually leading to the development of... There's nothing like taking a cruise on one of the world’s largest cruise ships… without any of the hassles of leaving your couch! Able-bodied seamen, decorative sails meant to evoke fish fins and dozens of security cameras will eventually make up the on-board complement of a mysterious four-story barge being built by Internet company Google Inc. A report from tech media website CNET has revealed that a mystery barge seen near San Francisco Bay's Treasure Island could be a floating data center being built by Mountain View, California-based search giant Google... and is this related to a mystery barge in Maine? UPDATE DON’T MISS: High-Def Google Street View from Inside a Ship

This summer Google took their cameras on board Schmidt Ocean Instituteâ€™s 272-foot research vessel, Falkor, while on a visit to the San Francisco Exploratorium at their new learning center facility at Pier 15 downtown. Already responsible for the loss of at least one ship, late-season Hurricane Sandy is expected to make landfall again tonight on the east coast of the United States.  The Google Crisis... By Cesar Morales Michael Jones’ presentation at the 2012 Joint Warfighting Conference regarding Google’s new ship tracking technology has ruffled a few feathers within the Federal Government. Unfortunately the government’s... With the 100 year Anniversary of the sinking of the RMS Titanic upon us, there is no shortage of “Remembering the Titanic” blog posts, galleries, movies and even reenactments to help... 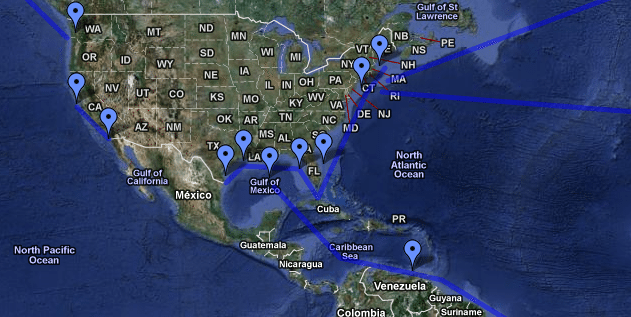 Chart Your Voyages And Share With Friends Via Google Earth

Maps are great visualizing tools that help tell a story and Google custom maps lets you create and share personalized, annotated maps of your world. The above map is just... TECH: Google Street View is shifting to the global waterways, starting with the Amazon

For over four years now, Google has been driving around the world’s roads to bring you 360-degree street-level imagery. The project is called street view and covers most US roads...

gCaptain was recently invited to visit Google HQ to meet Jenifer Austin Foulkes, the head of Google Oceans’ team, to share our ideas of integrating maritime information, like the tracking...

For the past few years thousands of trucks have been showing up at Google’s campus, discharging piles of books and picking up yesterday’s delivery. In what is now called Google’s...

A feature we recently implemented is gCaptain site search built on the google search engine. We had this before but only on the homepage, lat week we added new functionality...

Join the 73,591 members that receive our newsletter.