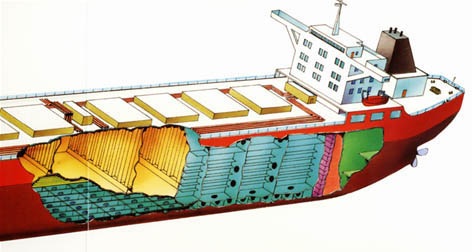 OPA 90, the legislation enacted after the Exxon Valdez incident mandated double hull technology, essentially wrapping a second hull around the first, on all newly built tankers. While this has been mostly effective and (had it been mandated for use on container ships) would have prevented last year’s San Francisco Oil Spill, it fails to protect the environment during catastrophic groundings. Mo Husain of MH Systems, Inc. has recently worked on perfecting alternative means of “loss of containment” prevention. He tells us:

CONCEPT MADE SIMPLE
Imagine a Straw…

The underpressure concept is best understood by making an analogy with which most people can identify. Imagine sipping water half-way up through a straw and sealing off the top of the straw with your fingertip. A simple principle of hydraulics allows the water to be held in the straw at this level until the finger is released.

This same principle allows oil to be contained within the hull should a rupture occur in the tank. When a tanker is loaded, the oil level inside the tank is higher than the surrounding seawater level. This causes a higher pressure to exist inside the tanker due to hydrostatic pressure. Normally, when a hull is ruptured, the pressure inside forces oil to flow out up to the level of the surrounding seawater (discounting density). Using AUPS, this complete loss would not occur.

The system equalizes the pressure inside and outside the tanker at the rupture point by applying a slight underpressure of 2 to 4 psi in the ullage space of the tank. As oil flows out, it is replaced by seawater up to the rupture point only. Oil loss is held to a minimum as all oil above the rupture point will remain in the tanker. In the event of an accidental grounding bottom rupture, AUPS would prevent virtually all oil spillage from the tanker.

For a comprehensive look at this system click HERE and for the work Mo is doing on Ballast Water Treatment visit his company’s blog found HERE.