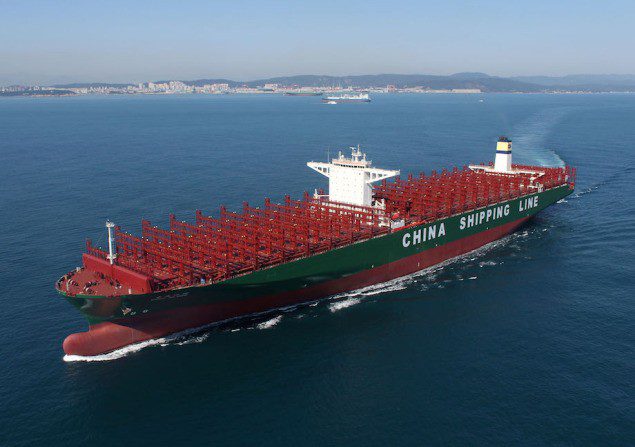 With a capacity to carry 19,000 TEUs, the recently named MV CSCL Globe is the world’s largest containership by cargo capacity. But that’s not all it’s known for. The newbuild for China Shipping Container Lines is also noteworthy for being powered by what is physically the largest engine ever constructed.

Just check out the size of this thing compared to a typical person: The new container vessel is one of five to be constructed for CSCL at Hyundai Heavy Industries in South Korea. HHI-EMD, Hyundai’s engine-building division, also constructed the record-breaking engine, again in Korea.

While CSCL Globe is the new world’s largest ship by TEU capacity, at 400 meters it is actually similar in length to Maersk Line’s 18,000 TEU Triple-E’s and actually .4 meters less wide at 58.6 meters (Triple-E’s are 59 meters wide). Triple-E’s, on the other hand, are equipped with a custom-designed ‘twin-skeg’ propulsion system, which uses two 43,000 horsepower engines powering two four-bladed propellers.

All five newbuilds for CSCL are expected to be delivered by the end of 2015, with the first two coming in 2014. The ships are to be deployed on the Asia-Europe trade loop.