After a 1,750 mile tow from Virginia, the Sturgis barge arrived at the Port of Galveston, Texas on Thursday where its nuclear reactor will be fully decommissioned.

The Sturgis is a former WWII Liberty Ship that was converted into the first floating nuclear power plant in the 1960’s as part of the US Army Nuclear Power Program. Before being shutdown in 1976, the Sturgis’ nuclear reactor, MH-1A, was used to generate electricity for military and civilian use in the Panama Canal. After that, Sturgis‘ reactor was de-fueled, decontaminated, and sealed before being towed to the James River Reserve Fleet at Joint Base Langley Eustis, Virginia, where it has been mothballed since 1978.

The decommissioning work will be carried out by contractor CB&I at the Malin International Shipyard. CB&I won the $35 million contract from the U.S. Army Corps of Engineers, Baltimore District to decommission, dismantle and dispose of the nuclear reactor aboard the Sturgis in April 2014. Radiological work is expected to begin in July. Once the work is completed, what remains of the Sturgis will head for a scrapyard in Brownsville, Texas where it will be dismantled. 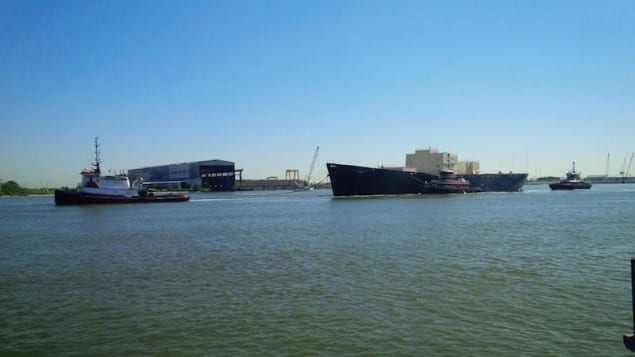