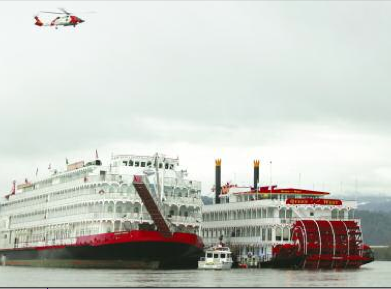 The cruise ship Empress of the North that hit a rock off Juneau Alaska this morning has had an eerilly similar incident in the Columbia River last year. As the Winter 2006/2007 Issue of the US Coast Guard’s magazine Proceedings reports:

A river cruise ship goes hard aground on a rocky
ledge outside the main navigation channel of the
Columbia River, near Portland, Ore. The vessel floods
and begins to list to port. Onboard are 260 passengers
and crew, and more than 35,000 gallons of diesel fuel.
It is a mild morning in early spring, but the weather is
notoriously unpredictable in the lower
Columbia this time of year, and sunset is in
seven hours. Many of the passengers are
elderly and cannot debark to shore. The
chill of the air, combined with the cold water temperature make the onset of
hypothermia a rapid certainty for any per-
son who falls overboard. This is not a drill.
Despite making the Columbia River voy-
age more than 100 times since being built
in 2001, the 360-foot Empress of the North
took an unexpected and nearly disastrous
turn recently, and Sector Portland was
ready to answer the call. The grounding
occurred near Washougal, Wash., just 20
miles east of Portland, Ore. The vessel
would remain there for 54 hours, and
motivate a multi-agency response that
captured the attention of thousands.

We will be reporting more on this story as the news comes in but until then here is the USCG report: LINK

UPDATE: This is the Vessel’s THIRD Grounding Fourth Grounding

John Konrad is a USCG licensed Master Mariner of Unlimited Tonnage currently working as Chief Mate aboard a 835′ ship in the Gulf of Mexico. Since graduating from SUNY Maritime College he has sailed in 4 of the worlds oceans and reports from his ship via satellite.

Empress Of The North