3. Coast Guard air and boat crews team up to free a sailboat pinned against jagged rocks by heavy surf.
May 27
Lopez Island, Wash.

*Our Friend Richard Rodriguez assisted on this rescue.

6. The crew of the Coast Guard Cutter Liberty rescues dozens after the cruise ship Empress of the North ran aground and began taking on water.
May 14
Icy Strait Point, Alaska

7. Coast Guard crews from across the Midwest provide mass evacuations when flooding left victims stranded and in peril in the across several.
August 23
Shelby, Ohio

8. A Coast Guard air crew rescues a woman attempting to row across the Pacific Ocean after her capsized in heavy seas.
August 24
90 miles west of Humbolt Bay, Calif.

9. A Coast Guard air crew sets an altitude record while rescuing an injured hunter from the summit of a mountain.
May 27
Brother Mountain, Wash.

10. A Coast Guard air crew rescues two men so far from shore they had to stop to refuel at a oil rig on the way back.
August 16
130 miles south of Galveston, Texas 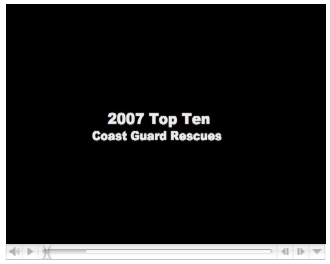 Join the 75,733 members that receive our newsletter. On this week’s episode of What’s Going on With Shipping, gCaptain contributor and YouTube host Sal Mercogliano is joined by maritime stock expert J. Mintzmyer of Value Investor’s Edge to...