A vessel transits the Galveston Fairway passing the SN Federica, after it ran aground 35 miles off Galveston, March 31, 2015. U.S. Coast Guard Photo

Here are some photos and video (below) from the U.S. Coast Guard showing a crude oil tanker trying to free itself from mud off Galveston, Texas on Tuesday.

The tanker is the 750-foot Italian-flagged MT SN Federica. The ship ran aground just before 8:30 a.m. Tuesday approximately 35 miles east of Galveston. The vessel was carrying nearly 17 million gallons of crude oil, according to the Coast Guard.

The vessel was able to free itself at approximately 9 p.m. Tuesday, the Coast Guard said. The vessel incurred damage to its forepeak. The vessel was first reported to be taking on water but it was later determined that the water was from the ship’s ballast tank.

No pollution or injuries were reported.

The Coast Guard Captain of the Port issued an order to restrict the vessel from federal waters until a damage assessment, underwater hull survey, dive report and ship’s classification survey report are complete to validate the seaworthiness of the ship. The MSU Texas City is overseeing the seaworthiness assessment and investigating the cause of the incident. 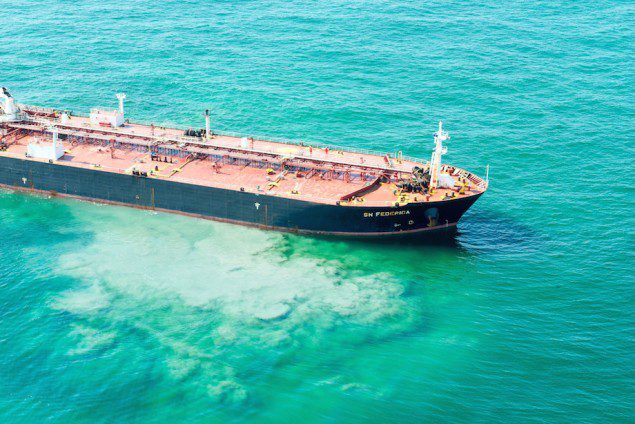 Join the 70,532 members that receive our newsletter.