by Ben Blanchard (Reuters) – Taiwan’s government has urged shipping companies not to unfairly push up their prices amid a global squeeze on shipping containers and a shortage of space on cargo ships,...

Maersk Forecasts A Return To Pre-COVID Container Demand In 2021

by Jacob Gronholt-Pedersen (Reuters) – Shipping group Maersk on Wednesday issued full-year earnings guidance above its forecast at the beginning of the year and said it expects demand for moving... Check out this video filmed Sunday at the Port of Antwerp as strong winds pummeled the area. According to the uploader, the port experienced hurricane-force winds gusts or more than... MUNICH, May 17 (Reuters) – Managers of insolvent P&R Group are being investigated after it was discovered the investment firm sold nearly one million more shipping containers than it owned,... MV Ever Smart Arrives in Los Angeles with Toppled Containers

The MV Ever Smart arrived at the port of Los Angeles on Wednesday showing clear evidence of the dozens of containers which were lost from the vessel during its voyage across... By Gibraltar Shipping Tim Britton is CEO of Spinnaker, specialised in the leasing, sale of new and used containers for shipping and storage purposes. Tim talks to us about how... By Gavin van Marle (The Loadstar) Declining asset costs and a variety of external factors are driving the container shipping industry into increasing use of container tracking and monitoring devices.... By Corina Pons and Jonathan Saul PUERTO CABELLO, Venezuela/LONDON, April 22 (Reuters) – Venezuelan state agencies have run up close to $1 billion in debts with shipping firms due to... How Many Shipping Containers Are Really Lost At Sea?

The World Shipping Council (WSC) has released an update to its 2011 survey and estimate of containers lost at sea. Public art, Arenc, Marseille Notes on the Arts and Visual Culture Wednesday, 4 September 2013; by Phil Beard There’s a school of thought that claims the invention of the shipping...

The development of a new type of 20ft container technology has taken a step further with the completion of a trial shipment of the so-called Tworty Box. A child stands at the door of a shipping container serving as his accommodation, in Shanghai March 4, 2013. The containers, which house different families, were set up by the... By Marc Levinson (Bloomberg) — Striking clerks at the nation’s largest port complex, in Southern California, agreed to return to work on Dec. 5, leaving Americans puzzled why a dispute...

What’s the Weight? Why Weighing of Cargo Containers is Critical

– By Captain Rich Madden Last year in a Persian Gulf port, we finished loading for a southbound transit to East Africa on a small container ship.  Our load plan... 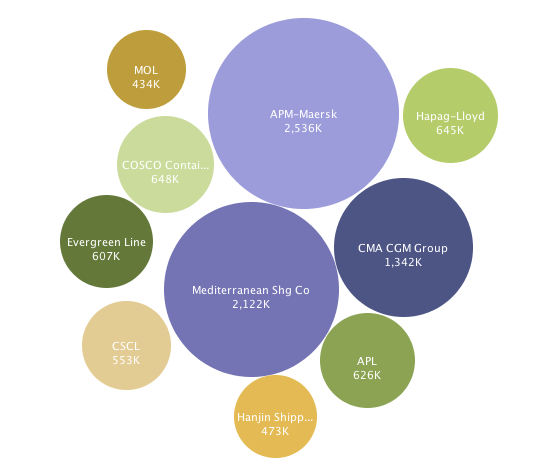 gCaptain is saddened to learn that Keith Tantlinger, inventor of the modern-day shipping container, has died at age 92.  In commemoration, here is a link to a great article by... Photo Credit: Maersk Line And you thought your late fees at the movie store were starting to add up? According to a report published by USA TODAY, the Pentagon has... Too often in the shipping community good ideas, new innovative ideas, suffer from lack of support and, strangled in red tape, die an early death. But today we have good... gCaptain has showcased a wide array of BIG ideas aimed at reducing the environmental impact of shipping. From giant kites flown off the bow of ships to catamarans made out...