Carnival Corporation has signed an agreement to build a new cruise ship for its iconic Cunard brand with Italian shipbuilder Fincantieri. The world’s largest cruise company said Monday it has... A search was launched and later suspended this weekend for a crewmember of Curnard’s Queen Mary 2 cruise liner who fell overboard Saturday off the coast of Newfoundland and Labrador.  Canada’s Joint... Ship Photos of the Day – ‘Three Queens’ Hit Up Liverpool

Cunard’s Queen Elizabeth, Queen Mary 2 and Queen Victoria meet in the company’s “spiritual home” in Liverpool for the very first time as part of the company’s 175th Anniversary celebrations,... Cunard Cruise Lines kicked off its 175th birthday celebration on Sunday with the gathering its Queen Mary 2, Queen Elizabeth and Queen Victoria at Cunard’s homeport in Southampton. The sailaway... A passenger aboard Cunard’s Queen Elizabeth cruise has died following an accident while boarding the ship from a tender. The ship was in the Sihanoukville, Cambodia when the accident occurred... To mark the 10th Anniversary of the iconic ocean liner, RMS Queen Mary 2, Cunard captain, Captain Kevin Oprey, agreed to go overboard and pose for these amazing photos from the bulbous bow of his massive ship. 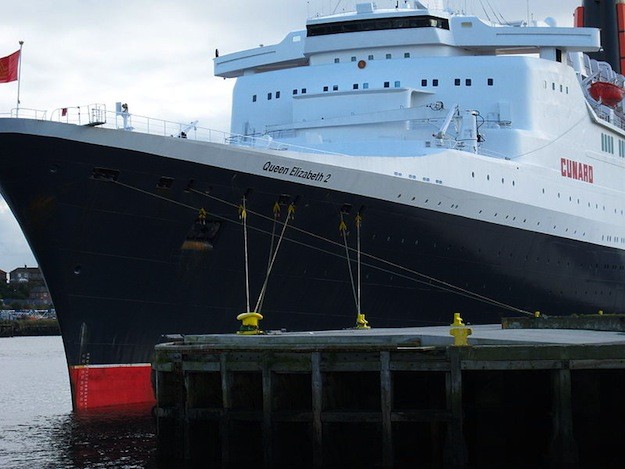 By Asa Fitch Dubai’s decision to turn the Queen Elizabeth 2 into a floating hotel has ended years of uncertainty about the fate of an asset snapped up at the... KapitÃ¤nleutnant GÃ¼nther Prien in 1940 Kriegsmarine Commander of Submarines Karl DÃ¶nitz devised a plan to attack Scapa Flow by submarine within days of the outbreak of war. Its goal would... Cunard Lines Considers Reflag Of Its Ships, But Not For The Reasons You Think…

Unlike most domestic flags, the British-owned and British-flagged fleet of ships has grown since 2000 when the government replaced corporate tax, one that taxed ship owners according to the size...

With just 267 days until she enters service Cunard Line’s latest ship, Queen Elizabeth, has been floated out from drydock for outfitting. The following is video fo the occassion which...

Maritime Journal Online writes of the QE2 entering port early Tuesday morning: On its way into its home port at Southampton the ship ran hard aground on a sandbank at...

Photo by AurelioZen NewYorkology tells us of the first / last ever meeting of its three grand ships; Cunard’s one-time-only royal rendezvous of its three queens — the QE2, QM2...

QM2 Arrival – A View From The Sky

The Cincinnati Enquirer as us: “As new cruise ships continue to get larger, it begs the question: Is bigger better?” I admittedly don’t know much about cruise ship operations but...

The BBC tells us: Cunard Lines is to build a 92,000 tonne liner which will be called the Queen Elizabeth. The ship, which will be based at Southampton, will carry...

The most elegant ship built in decades has caught the inspiration of artists, photographers and amateur ship spotters worldwide. She is elegant, record breaking and capable. She’s also a YouTube...