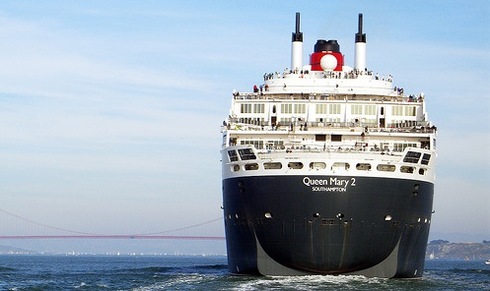 The most elegant ship built in decades has caught the inspiration of artists, photographers and amateur ship spotters worldwide. She is elegant, record breaking and capable. She’s also a YouTube Star! Here are two videos of the Queen Mary II that have reached over 25,000 viewers and for good reason. Take a look:

Like most celebrities she is also photogenic. The best series of photographs are by San Francisco Photo Blogger Todd Lapin and his team over at Telstar Logistics. Here is a slideshow of his photographs:

The QM2 is more precisely referred to as an ocean liner, rather than a cruise ship; with its sleeker hull and more powerful engines, it was designed to cross oceans. Cruise ships, which typically sail closer to shore, have a more squarish profile for larger passenger loads.

Like the QE2, the QM2 is named after a ship, not a monarch. Eric Flounders, a Cunard spokesman in London, said that the original Queen Mary was the first vessel built after Cunard and White Star created one company. Before that, Cunard’s ship names typically ended in ia (Caronia, for example), White Star’s in ic (Titanic). Middle ground was sought (sorry, Queen Victoria). The liner, named after George V’s wife, sailed from 1936 to 1967.