The cutter is named for Capt. Joshua James, who is credited with saving more than 600 lives during his time with the U.S. Life-Saving Service, which merged with the Revenue Cutter Service in 1915 to create the modern U.S. Coast Guard.

James’ lifesaving career began at age 15 when he joined the Massachusetts Humane Society and ended with his death while on duty with the U.S. Life-Saving Service in Hull, Massachusetts, at age 75.

The Coast Guard’s latest 418-foot National Security Cutter, James (WSML 754), is the fifth of eight planned National Security Cutters – the largest and most technologically advanced class of cutters in the Coast Guard’s fleet. The cutters’ design provides better sea-keeping, higher sustained transit speeds, greater endurance and range, and the ability to launch and recover small boats from astern, as well as aviation support facilities and a flight deck for helicopters and unmanned aerial vehicles.

This week the U.S. Coast Guard celebrated its 225th birthday, commemorating the date when President George Washington signed the Tariff Act on August 4, 1790, authorizing the construction 10 “revenue cutters” requested by Secretary of the Treasury Alexander Hamilton to enforce federal tariff and trade laws and to prevent smuggling.

This photo opportunity with the Coast Guard Cutter James and Coast Guard Barque Eagle was arranged while underway in the Atlantic Ocean. 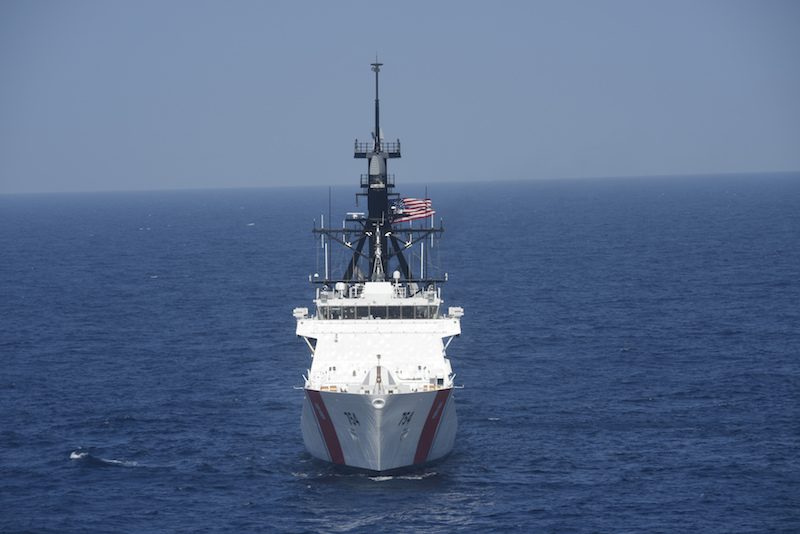 ship photo of the day
USCG