Bulk carrier (FANEROMENI) was fired upon by as many as 14 pirates in two skiffs on 30 November at 1405 UTC while underway in position 12:18N – 044:03E, approximately 42 nm southeast of Perim Island, Yemen.  The armed security onboard returned  fire until the skiffs ceased their attack and backed off.  (UKMTO)

Bulk carrier (CHRISTINA IV) was fired upon by six pirates in a skiff on 29 November at 0822 UTC while underway in position 15:01N – 056:36E, approximately 215 nm northeast of Socotra Island, Yemen.  The armed security onboard returned fire while the vessel increased speed and took evasive action resulting in the pirates aborting their attack.  (UKMTO) 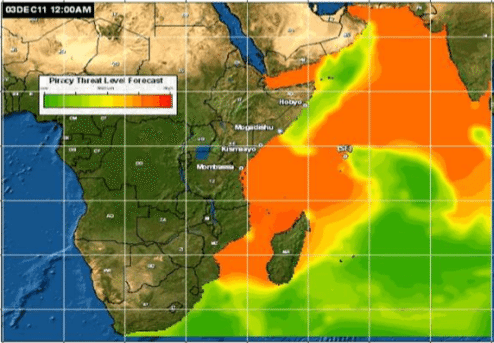 A. GULF OF ADEN: Currently, winds and seas within the GOA are light (ENE 8 – 12 knots, 1 – 3 feet).  EXTENDED FORECAST: Minimal impacts from winds or seas should be expected through 07 Dec.

B. SOMALI COAST: Residual waves from the tropical wave in the N. Arabian Sea have affected the waters off the Somali Basin. Expect winds NNE 12 – 16 to increase and range from 18 – 22 knots by 02 Dec. Sea heights will remain a moderate impact, ranging from 3 – 5 feet through next 72 hours. EXTENDED FORECAST: NE winds 18 – 22 knots and seas 3 – 5 feet will provide moderate impacts to the Somali Basin through 07 Dec.

D. INDIAN OCEAN: ESE winds 5 – 10 knots and seas 1 – 3 foot will persist off the Tanzania and Kenyan coastlines for the next 72 hours. Expect minimal impacts (VRB 5 – 10 knots, 1 – 3 feet) within the sheltered waters of the Mozambique Channel through 03 Dec. EXTENDED FORECAST: There will be minimal impacts in the waters off the Kenyan/Tanzanian coastlines, as light winds of variable directions and calm seas persist through forecast period.  Minimal conditions in the Mozambique Channel through 05 Dec but will slowly degrade as moderately impacted seas of 3 – 5 feet and southerly winds 12 – 16 knots influence conditions.

E. SURFACE CURRENTS: Currents within the Somalia Basin, Gulf of Aden, and into the Indian Ocean remain variable with most areas having average speeds of less than 2 knots. An east to west current has set up in the northern GOA, along the Yemeni coast. Other areas of concern exist just southwest of Socotra Island and off the southern Somali/Kenyan coasts. These localized areas have slightly increased speeds of up to 3.2 knots.