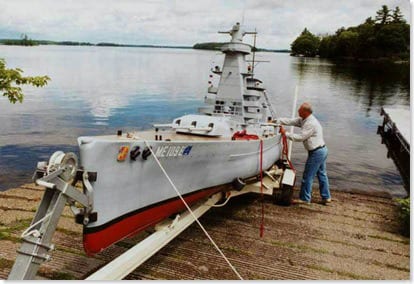 From the gCaptain archives…

Our friend Peter Mello at Sea-Fever, a must read maritime blog, brings us the model building obsession of William Terra. This one stopped me cold for a number of reasons. First Battleships have been a personal obsession of mine since childhood and were the subject of the weapons presentation during my plebe year at Annapolis. Second, these “manned models” are an excellent (some say superior) alternative to simulators for shiphandling training. Last, if it comes from Sea-Fever it’s bound to be interesting.

For those who are unaware, Port Revel in France and Massachusetts Maritime Academy both host shiphandling classes aboard diminutive versions of real life vessels. These classes are for Marine Pilots and senior maritime officers. BBC News tells us;

To the casual onlooker, it may look like a group of overgrown children sailing in rather extravagant model boats. But, in fact, they are some of the shipping industry’s most experienced sea captains on one of the world’s most unusual safety training courses.

The lake in Marchwood, near Southampton, Hampshire, boasts a fleet of seven scaled-down model cargo ships on which veteran captains, pilots and senior deck officers can hone their skills.

The ships, which are big enough for two people to sit in, behave exactly like the real thing as they negotiate the 13-acre lake’s artificial channels and tides.

They range from a scaled version of a 300,000 tonne vessel that itself weighs in at six tonnes to a radio-controlled model tug.

So is this simply an excuse for taking some time off work to muck about on the water?

Having taken the class myself I can honestly say the answer is no.

Upon first arrival at the academy I was skeptical of the ability to learn advanced shiphandling techniques on a model that is a fraction the size and weight of the original, however, during my first “test drive” I quickly realized the value of this class. The reason it’s the best option for this type of training is two fold. First the alternative, bridge simulators, do not give you the “feel” of the water and fail to project the sense of emergency when things start to go wrong. This class however, uses real boats that happen to be very expensive and rare… knock one of these against pier and real damage will occur that you will feel it both in the seat of your pants and in your gut.

Second this training is valuable since, as Captain Clarke tells the BBC: “You cannot turn up at Fawley oil refinery in a ‘150,000-tonner’ and say I just want to do a few practice turns.”

To be honest with our readers I originally took the class because Advanced Shiphandling Training was a U.S. Coast Guard requirement for receiving my Unlimited Master’s (captain of large ships) License and Mass Maritime provided the training in half the time (just 5 days) required by the simulator based schools. I learned to love the class because it provides a unique hands on experience that allows you to test shiphandling theory at in accelerated and valuable way.