The tow-out of the platform destined for the Hebron Field located off the coast of Newfoundland and Labrador has commenced, partners in the project have announced.

The tow commenced earlier this month from the Bull Arm Construction Site in Mosquito Cove, NL.

The Hebron field is located in the Jeanne d’Arc Basin approximately 350 kilometers offshore Newfoundland and Labrador. The field was first discovered in 1980, and is estimated to produce more than 700 million barrels of recoverable resources.

The platform, which measures about 220 meters in height, is to travel at about two to three knots and is expected to take up to two weeks to reach its final destination, pending suitable weather conditions.

“Tow-out of the platform is a major step toward our ultimate goal of commencing production from the Hebron field later in 2017,” said Geoff Parker, senior project manager for Hebron and vice president of ExxonMobil Canada Properties. “This is a proud day for the entire Hebron team – including the thousands of Newfoundlanders and Labradorians who have worked safely on this project.”

The tow fleet includes 10 large, anchor-handling tug supply vessels designed specifically for managing large towing operations. Many of the local Atlantic Towing and Maersk vessels have been employed for the tow. Upon arrival at the Hebron field, the towing fleet will re-configure and the platform will be ballasted to sit on the sea floor in its permanent position. Water depth at the field is about 93 meters. Once it is fully commissioned and all regulatory permits are in place, drilling operations will begin with first oil anticipated before the end of 2017.

“Safely building the platform has been the goal of the project since day one,” said Parker. “The project has achieved a phenomenal 40 million hours in the province without a lost-time incident. The strong safety culture for this project has been built on teamwork, engaging with trade unions, sharing and respecting each other’s ideas, and genuinely caring about one another’s wellbeing. This is a phenomenal achievement.” The Hebron platform consists of a stand-alone gravity-based structure, which supports an integrated topsides deck that includes living quarters, and drilling and production facilities. The facility is capable of storing 1.2 million barrels of oil and producing 150,000 barrels per day at peak rates. The Hebron field is estimated to contain more than 700 million barrels of recoverable resources. 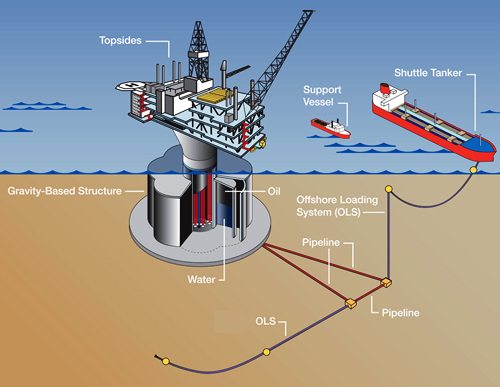