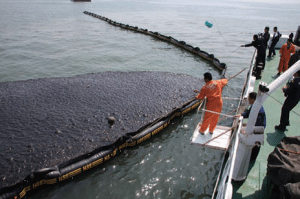 The move comes after China’s State Oceanic Administration ordered a halt to all operations last week at the Penglai 19-3 oil field, which is jointly owned by both companies.

ConocoPhillips, which operates the oil field, said last month it hadn’t been notified of any claims resulting from the spills, but would consider them as they came.

The U.S.-based oil company estimates that more than 3,200 barrels of oil and oil-based drilling fluids have been spilled at the site since early June.