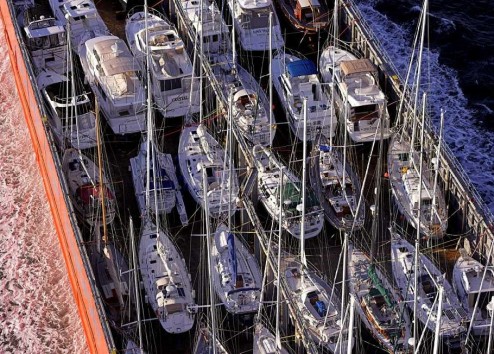 Dockwise Yacht Transport has been in the boat delivery business for 21 years. Their semi-submersible vessels operate world wide.

Launched in April of 2008, the China Built heavy lift ship Yacht Express is the world’s largest float-on float-off yacht carrier (Video). This amazing ship has opened a regular round-trip service between Florida and the Mediterranean. 18 yachts worth in total some £78 million are being carried aboard the 209m long vessel on its inaugural voyage. Here is information from the owners:

As the leaders in yacht transport since the 1980s, Dockwise Yacht Transport is taking yacht delivery to an even higher level by introducing the world’s first specifically-built yacht carrier, Yacht Express.

The carrier provides the fastest transatlantic service ever from Florida and the Mediterranean each month. This new yacht transport vessel features amenities designed for worldwide yacht transport, including: conference room, media room, an atrium with a swimming pool, fitness room, complimentary cabins for ride-aboard crew and other facilities to make the voyage as productive and pleasant as possible. This yacht transport vessel is the largest vessel of its kind in the world.

Design Features
This specially designed yacht carrier is semi-submersible in order to maintain the unique float-on/float-off loading method. The yacht delivery carrier will have a length of 209 meter (685.7 ft) and a beam of 32.2 meter (106 ft). The yachts can be safely accommodated between the spray covers in the dock bay, which measures a deck space of 165 meter (541 ft) in length and 31 meter (102 ft) in width. With a deck space of 5,115 square meters (55,060 ft) DYT is able to transport more yachts in one voyage.

The spacious bridge features an integrated bridge system consisting of a UniMACS 3000 with two radar systems with ARPA and two ECDIS, one conning and platform management system, incorporating an advanced DPT 3500 autopilot/joystick system.

“More important is that this sophisticated yacht carrier is designed to have a service speed of 18 knots”, said Clemens van der Werf, President of DYT, “meaning that a trans-Atlantic voyage from the Mediterranean to Florida/Caribbean with this ultra modern yacht carrier will be reduced by nearly 50% from 15 to 8 days! Owners can enjoy the advantage of extra riders on board to accompany the yacht during the voyage and they can enjoy our state-of-the-art facilities on board. The addition of this new yacht carrier to our fleet implies an important step forward for DYT to improve the quality of services to clients that is based on safety, regularity and reliability.”

The launch of the Yacht Express was a major milestone in the development of the yacht transport industry. On January 15th, 2007 the Yacht Express was skidded from its construction berth ashore, where it was built since September 2005, onto four connected floating submersible barges. The skidding process was completed within 6 hours.

On January 19th, 2007 the barges were submersed and the Yacht Express floated off at high tide and moored alongside the construction berth for further outfitting and commissioning. Dockwise Yacht Transport took delivery of the vessel in October, 2007.

…And for anyone that’s curious: yes it is built to sink.

Photos of Dockwise in action can be found HERE.

This post was written by gCaptain staff and Richard Rodriguez who can also be found at the Bitterend of the internet.