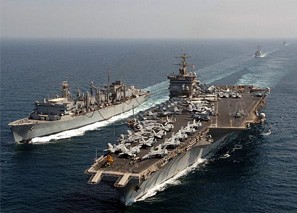 WASHINGTON (Dow Jones)–The Senate will hold on Wednesday its first hearing since 2007 on ratification of the controversial and long-stalled Law of the Sea Treaty.

Opponents of the treaty, who have prevented it from coming up for a vote before the full Senate, argue that the pact would erode U.S. sovereignty and shackle U.S. operations on the world’s oceans. Last week, the House passed an amendment to a defense spending bill that would block U.S. funding for implementation, creating a possible showdown later with the Senate.

Interest in the Law of the Sea treaty has soared in recent months, helping pave the way for the renewed ratification drive.

Aggressive Chinese behavior and maritime claims over wide patches of the South China Sea provoked a sharp response from top U.S. officials including Mrs. Clinton last fall, and heightened interest in international rules that would preserve the right of U.S. ships to freely transit the world’s waterways.

Saber rattling late last year by Iran, including threats to close the Strait of Hormuz, rekindled interest in the treaty’s guarantees for commerce through international straits. And the growing scramble for natural resources in the Arctic Ocean, including oil and natural gas, has sparked renewed interest among the U.S. business community in the treaty’s safeguards for a country’s undersea resources.

“Not since we acquired the lands of the American West and Alaska have we had such a great opportunity to expand U.S. sovereignty,” said Mr. Panetta at a recent news conference, urging U.S. ratification.

While last year’s tensions between China and other Southeast Asian nations drew attention to the maritime provisions of the law, the coming battle for Arctic resources is driving fresh interest in the U.S. Last week, the U.S. Chamber of Commerce–the largest business bloc in the U.S. and a frequent sparring partner of the Obama administration–voiced support for ratification.

The treaty would offer U.S. businesses “clear legal rights and protections” to “take advantage of the vast natural resources in and under the oceans off the U.S. coasts and around the world,” the Chamber told House members in a letter urging rejection of the funding-limit amendment.

The Heritage Foundation and other conservative organizations have lined up to oppose the bill. Sen. James Inhofe (R., Okla.), a member of the Foreign Relations Committee, opposes the treaty as a threat to U.S. sovereignty and security.

The treaty was drafted in 1982, and then-President Ronald Reagan declined to send it to the Senate for ratification because of concerns over sea bed mining provisions. Those provisions were modified in 1994, but lawmakers have continued to oppose the pact.

Sen. John Kerry (D., Mass.), the chairman of the Senate Foreign Relations Committee, said that approval of the treaty is critical because other nations are moving to lay claims in the Arctic and elsewhere.

He dismissed suggestions by some critics that the treaty gives too much power to international organizations, reducing American sovereignty.

Supporters believe they can frame support for the treaty as a jobs issue.

“The Chinese are staking claims every day,” Mr. Kerry said. “The United States needs to protect its claims. If people want to be on the side of letting China run away with the ballgame, then they can sit on the sidelines.”