A double-hulled oil tanker owned by Overseas Shipholding Group sustained damage, but is not believed to be leaking oil after alliding with the San Francisco Bay Bridge Monday morning.

A statement released by the San Francisco Bar Pilots Association said that at approximately 11:15 a.m. Monday morning, the Overseas Reymar, a 69,636 DWT Panamax oil products tanker, made contact with the fendering system of the Echo tower (eastern most tower) on the western span of the Bay Bridge.

The ship was headed out to sea at the time and was being guided by a San Francisco bar pilot.

The vessel was not carrying any petroleum cargo and sustained scrapes and dents to the right rear starboard quarter above the waterline. No one onboard was injured and there were no reports of any fuel or oil in the water. Visibility is believed to have been at about a quarter mile at the time of the allision, according to media reports.

The pilot involved has been a San Francisco bar pilot since 2005, according to the statement, and he remained onboard the vessel as it was moved to Anchorage 7.

In a statement to the press, OSG spokesperson Darrell Wilson stated, “There are no reports of injuries or pollution.  The ship was sailing outbound with a pilot on board and as the ship passed one of the bridge towers it came in contact with an underwater portion of the structure.

The crew reports no loss of steering or propulsion and that initial investigations shows no water leaks from any of the ballast tanks. The ship’s crew safely anchored the vessel and made all proper notifications to the authorities.”

A unified command is being set up in response to the incident. 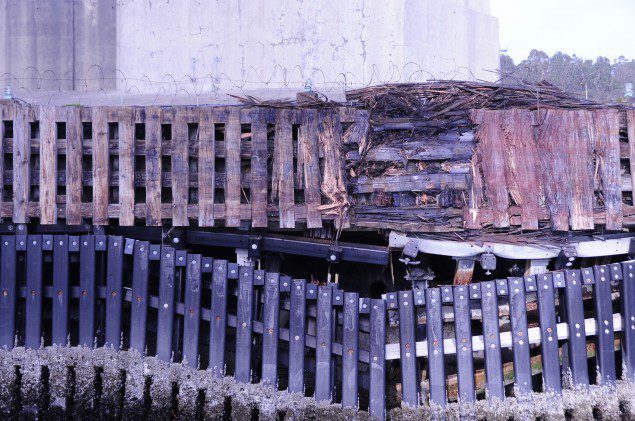