A submarine scouring the floor of the Indian Ocean for the missing Malaysian jet had to abort its maiden voyage after descending too deep, providing investigators with less than half the data the equipment was meant to capture. Drilling in deepwater is a fairly complicated for a number of reasons. 1) You’re floating in the ocean while maintaining exact position over the well located over a mile and... McDermott International’s Lay Vessel North Ocean 105 (LV105), a deepwater reeled pipelay installation vessel, will be heading to work at Brazil’s pre-salt and Campos Basin area as part of a 200-day... Technip announced today the award of a “major” subsea contract today, one valued between €500 to €1,000 million, by ENI Muara Bakau B.V. for the Jangkirk project offshore eastern Borneo. ENI Muara... In his company’s 2013 annual report, Mr. Koh Poh Tiong, chairman of Singapore-based Ezra Holdings, recently commented on his company’s growth in the subsea sector: Since coming on as a relatively new... Volstad Shipping has announced today they have secured the required financing to execute the previously announced construction contract for a new 128-meter offshore construction and subsea IMR vessel at Tersan shipyard... Below the surface of the ocean, wrapping invisibly around the planet covered mostly with fine mud particles and the carcasses of dead organisms is the internet, in its physical form....

EMAS Focused on $9 Billion in Subsea Projects in 2014

Offshore/subsea contractor EMAS notes today that their year is off to a strong start so far with 22 percent high revenue than last year’s corresponding period.  The Subsea Services division... DOF Subsea AS, a subsidiary of DOF ASA, has been awarded several contracts, with a total value of approx. NOK 150 million. In the Atlantic region, DOF Subsea has been... In November 2010, following the tragedy of the Macondo disaster, the U.S. Bureau of Safety and Environmental Enforcement (BSEE) issued a notice to all lessees and operators working on the... Technip and Subsea 7 will be working together offshore Ghana on a USD $1.23 billion SURF project for Tullow Ghana announced today. The Tweneboa-Enyenra-Ntomme Development (TEN) Project, located in the... Rather than the costly process of scrapping offshore rigs once their production days are over, operators are choosing a perhaps more environmentally-friendly option, leaving the rigs in sea to become... 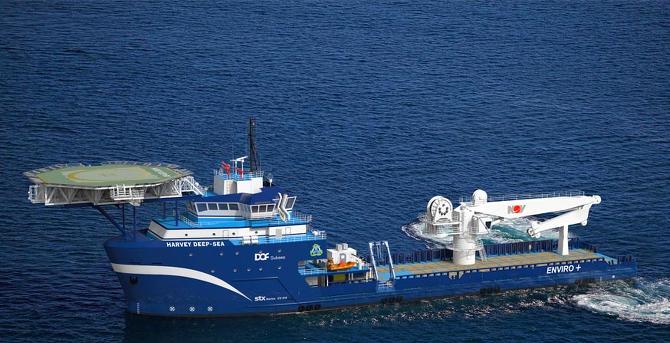 Harvey Deep-Sea Heads to Work in the Gulf of Mexico

The recently delivered Harvey Deep-sea, a 302-foot subsea construction vessel designed by STX Marine, successfully completed commissioning this month and is currently preparing for its first subsea projects in the US Gulf... EMAS AMC Awarded Over Half Billion in Offshore Project Contracts

Singapore-based offshore contractor EMAS AMC, a subsidiary of Ezra Holdings, has been awarded major new contracts around the world resulting in an increased contract backlog of approximately $505 million. Offshore... Technip announced today they have been awarded a lump sum contract by Statoil for pipelay and subsea installation work on the SnÃ¸hvit CO2 Solution project. The SnÃ¸hvit field has been in... An interesting trend in recent years has been the increase in high spec supply vessels ordered to service the offshore oil and gas industry, in addition to larger vessels needed...