By Captain John Loftus – As one of the co-authors of “Spotlight on Safety”, I was onboard as part of the presentation team sponsored by the International Organization of Masters, Mates... The U.S. Department of Labor’s Occupational Safety and Health Administration (OSHA) has cited five contractors for safety and health violations after three employees were killed and two others critically injured... An Alarming Number Of Shipping Companies Are Banning Knives, Here’s How To Stop Them

by Capt. John Konrad (gCaptain) A disturbing and dangerous trend is growing offshore. Despite overwhelming evidence that knives are essential to the safety of life at sea, shipping companies are... This Might Be The Best Maritime Commercial Ever [VIDEO]

This VLinc video, produced by gCaptain’s own Mario Vittone, might be the best maritime commercial ever but it’s certainly the most true. We also consider Mario’s new series of Safety... Sailing, marine technology and nautical history. What lessons can shipping learn from these apparently disparate segments of the maritime world? In this video Richard du Moulin presents real case studies... Risk And Reward At Sea

By Captain George Livingstone – Choosing to be a professional mariner is more than a professional choice, it’s a life choice.  There are few other professions like it.  The stress and... Editorial: Public Demand for Commerce – Going “All In” To Eliminate Accidents

By Capt. George H Livingstone I recently saw the movie “Sully”, I recommend it to anyone with an interest in aviation or marine transportation.  It is a Clint Eastwood Directed... 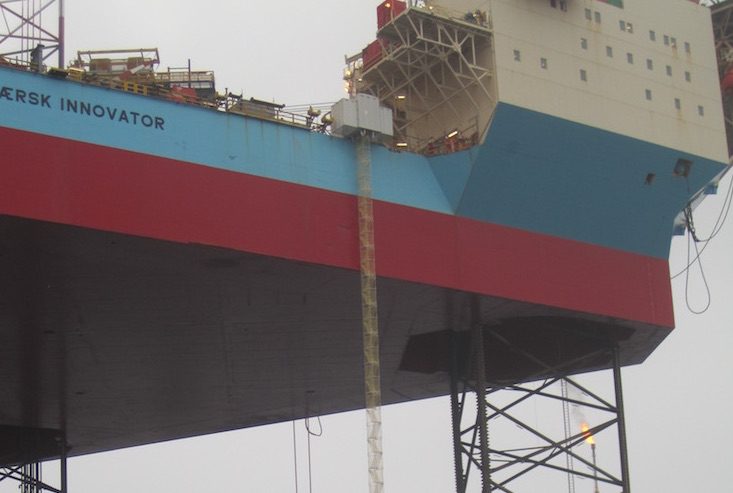 VIKING Life-Saving Equipment says it has received type approval for its record setting 81-meter evacuation chute developed in response to the increasingly large rigs being introduced in the offshore industry.... Monday Update: The detention of the MV Kind Seas has been lifted by the Coast Guard, according to the ship’s managers. “Managers of the Kind Seas report that Class NK has... By Captain Richard Madden, Those on deep-sea vessels frequently overlook the lessons learned from brown-water and fishing vessels.  This is unfortunate as it is much nicer to learn from others’... Bob and Marianne Fearnside’s son Richard disappeared one evening while traveling home this year on a P&O Cruises ferry. “He went on deck for a cigarette and never returned” the... The UK Maritime Pilots note that during a recent pilot disembarkation from a dry cargo vessel, both ropes on the pilot ladder parted simultaneously causing the pilot to fall approximately... Years ago if you wanted to import bananas you had two choices. You could pick the bananas when they were still green and un-ripened so they would arrive a week... By Bill Redmond It would not be unreasonable to ask if now is the time for the International Maritime Organisation (IMO) to be administered an effective enema, such has been...

The International Chamber of Shipping (ICS) has published new guidance for shipowners on how shipping companies and crews can implement an effective ‘safety culture’. The new ICS Guidelines, being distributed... Arctic nations must urgently improve rescue services in the resource-rich region that is opening up fast to shipping, energy and mining companies, experts say. (Bloomberg) — Organizers of the America’s Cup will work with the U.S. Coast Guard to investigate the accident that killed two-time Olympic sailing medalist Andrew Simpson yesterday during the Swedish team Artemis Racing’s...

Have a news tip? Let us know.
1 2 3 4 Next
Back to Main Next
We use cookies on our website to give you the most relevant experience. By clicking “Accept”, you consent to the use of ALL the cookies.
Cookie settingsACCEPT
Manage consent