The Canadian Coast Guard is responding to the grounding of a bunkering tanker off Sydney Mines, Nova Scotia after the vessel experience engine failure. Canada’s Dept. of Fisheries and Oceans reported the... U.S. terminal operator Ports America and Sydney Harbour Investment Partners have announced an agreement for the promotion, development and management of the proposed Novaporte deepwater mega-port in Sydney Harbour, Nova... The Canada-Nova Scotia Offshore Petroleum Board (CNSOPB) announced late last week that BP and Shell were the successful bidders for exploration licenses offshore Nova Scotia.  These blocks are located approximately... 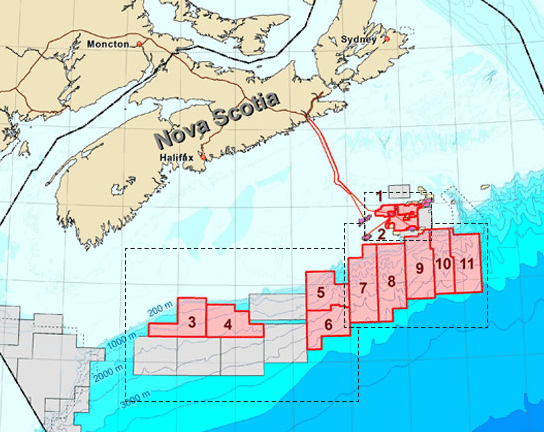 OTTAWA–Nova Scotia is drawing “considerable interest” for 11 offshore energy exploration parcels that are up for bidding, after Royal Dutch Shell PLC (RDSA) won an earlier round with a record... In a continued effort to bolster economic growth and create jobs, the Canadian Government has announced a plan aimed to help maximze the benefit of countries aggressive federal shipbuilding plan... Canada Awards Hefty Shipbuilding Contracts: And The Winners Are… Contracts will soon be awarded to Canadian shipyards for an aggressive $35-billion shipbuilding project, the largest military procurement in modern Canadian history. The National Shipbuilding Procurement Strategy (NSPS) is a... Join the 71,286 members that receive our newsletter.