Crowley Fuels has signed construction contracts to build a 55,000-barrel, articulated tug-barge (ATB) to serve the Western Alaska market. Crowley says the 410-foot ATB will be specially designed for the... [contextly_sidebar id=”eOLvSDYOHbWxSU4aqGS4PN91bSupVF6w”]A suggestion from Naval Architect Caitlin Ness to Getty Images has led the stock photo agency to create a collection featuring female marine engineers. The Lean In collection is... Jensen Maritime and Vigor are getting ready to unveil the design for a new 352-foot catcher processor/factory trawler. The design is the product of collaboration between Jensen, the design architect,... 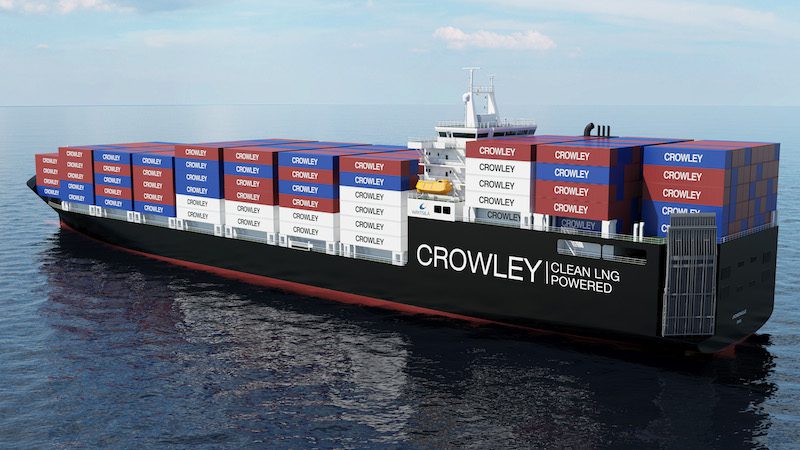 Jensen Maritime, has been awarded a contract to design some of the first liquefied natural gas (LNG) bunker barges in the U.S. for LNG America LLC.

Seattle-based Jensen Maritime Consultants, a Crowley Maritime Corporation company, announced today that it has expanded its presence to the U.S. Gulf with the establishment of a third office in New Orleans, La. This... Capable of Fishing 76,800 Hooks Per Day, Jensen to Design One of the World’s Largest Longliners

Jensen Maritime Consultants said today it has won a contract to design a longline fishing vessel that, once completed, will be one of the world’s largest.  The contract was awarded... Seattle-based Jensen Maritime Consultants, Inc. announced today they have been chosen to design a custom “super pumper” fireboat for the City of San Francisco Fire Department (SFFD) that will enhance... Jensen Maritime Consultants said it has completed the design of three tugboats for Moran Towing Corp. of New Canaan, CT bringing Moran’s Jensen-designed series of tugboats to five. The three...

Company Invites Fans to Follow Company for Latest News, Photos and More Jensen Maritime, a Crowley Maritime Corp. company, announced today the launching of a company Google+ page, which can...

Join the 68,589 members that receive our newsletter.