gCaptain searches the web each week to bring you the world’s most interesting and inspiring ships, but you don’t need to be a naval architect to design an imaginative vessel. The are the world’s best examples of buildings inspired by ocean going ships. 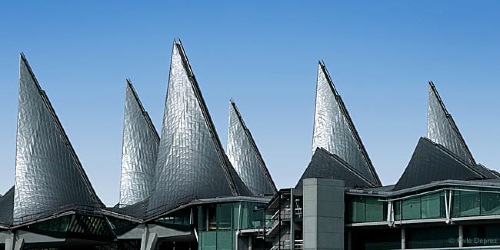 The Ship Residence – High upon a promontory on South Bass Island in Lake Erie at Put-in-Bay, Ohio, sits the Owners and Captains Quarters of the former Great Lakes Shipping Boat, The Benson Ford. The boat was built by Henry Ford and named after his grandson many years ago. After fifty years of service on the Great Lakes, the Benson Ford was scheduled in 1986 to be scrapped at the Port of Cleveland, Ohio. On the top front section of the boat were the walnut paneled state rooms, dining room, galley, and passenger lounge designed by Henry Ford for his own pleasure while traversing the Great Lakes on business. (Source: Sea-Fever) 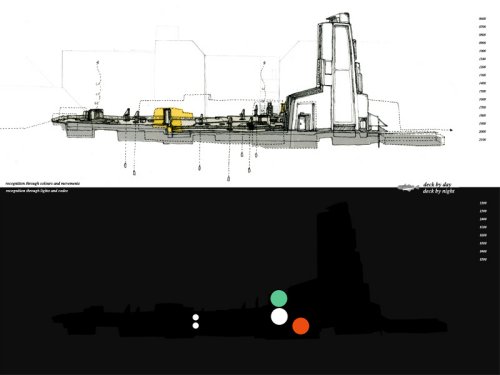 Ship Drydock Design – The scheme is a retirement home for elderly fisherman that also houses a working men’s club for members of Newcastle’s fishing community,” Pearson writes. “As a reflection of the separation and torpor of this unique society, the scheme takes the notion of the ship in an architectural context, to create an ersatz environment which interacts with the city around it as if it were a dry docked vessel. The environmental technologies and the ways in which the notional ship has been translated into an architectural system are the focus of this study.” (Source: BLDBLOG) 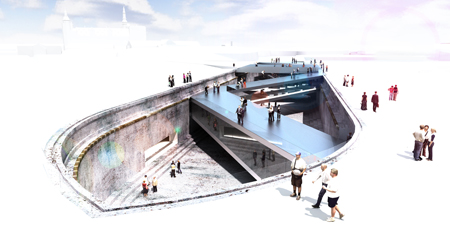 BIG’s Maritime Museum – BIG [the Bjarke Ingels Group], has recently won a competition [by unanimous decision, even though they apparently didn’t adhere to the design brief – ninjas in true form] to design the Danish Maritime Museum in HelsingÃ¸r, DK. While searching for an appropriate site for the proposed project, the firm discovered an abandoned 150m long, 25m wide, and 9m deep concrete dry dock within eyesight of Kronborg Castle . (Source: MNY) 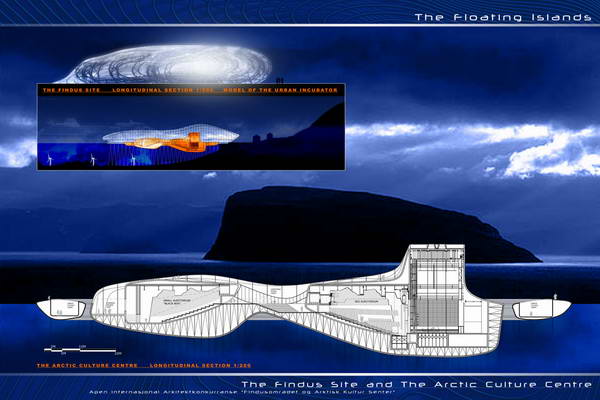 Floating Islands – A design by Vincent Callebaut Architectures, Floating Islands is a flexible masterplaned multi-energy town. By using current power generators and other green technology this is a futuristic design for green living. Callebaut’s vision is “creation which consists in mixing a scientifical and cultural survey with a computer programmatic approach in order to transcribe in architecture landscape distortions or ecosystem abstractions. Each architectural project at any scale, wants to anticipate through this digital hybridization, the future lifestyles by inventing new imaginary worlds. More poetic worlds. More equitable worlds. More natural worlds. Actually, more humanistic worlds! ” 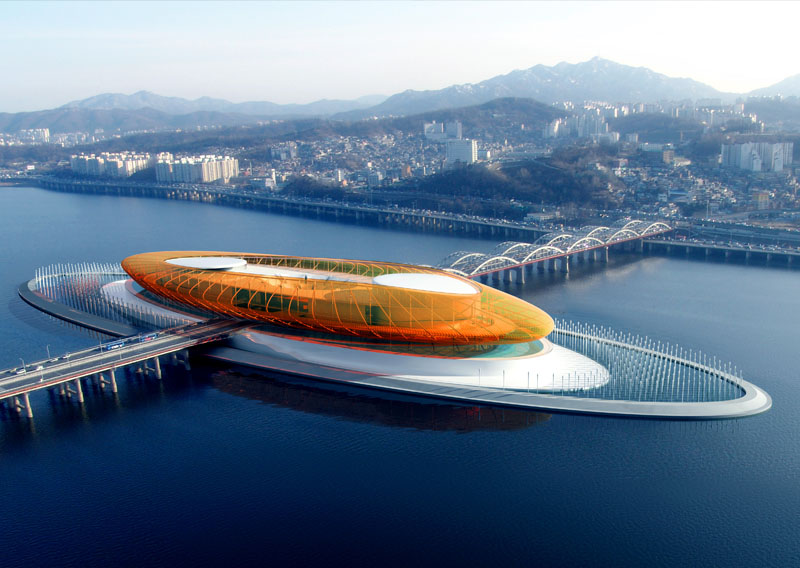 – ” Whereas the orchestra is in rehearsal, we continue our walk towards the places switched by the sound of the soprano and the violins. The both performing rooms of 1500 seats each are megaliths submerging from the floor. They are located at the extremities of the island and each of them is isolated from the road by two blocks gathering together annex functions like workshops and rehearsal rooms, public sanitary, offices and technical spaces. Their double layer of concrete protects the shows from feared sounds of low frequencies coming from the freeway traffic. They are very white and diffuse a extraordinary light ! The roundness of these hulls makes us think of the most beautiful ships and plays with the shadows of the linen seams which projects itself at the surface. ” (Source) 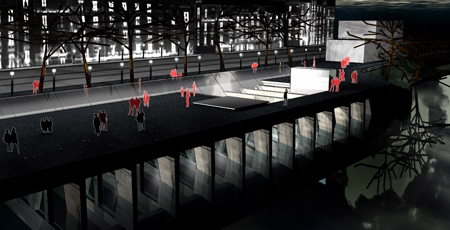 Nantes Slavery Memorial, France – Bonder + Wodiczko are received an ACSA award for their work on the design of a memorial to the abolition of slavery [Memorial Ã  l’abolition de l’esclavage] in Nantes, France. Visitors to the memorial will walk along an altered landscape, littered with plaques commemorating each ship that carried slaves into Nantes [the plaques will display the name of the ship, the date, the number of slaves on board, and the number of slaves who lost their lives on the voyage]. Having walked along the length of the glass [which you can see actually slips through the ground plane], visitors descend a monumental staircase into a subterranean passage where these three aforementioned witnesses – the river, the quay, and the sky – meet [through the reflection from the glass] in one confined space. (Source: Architecture.MNP)UPDATE: Reader Submissions 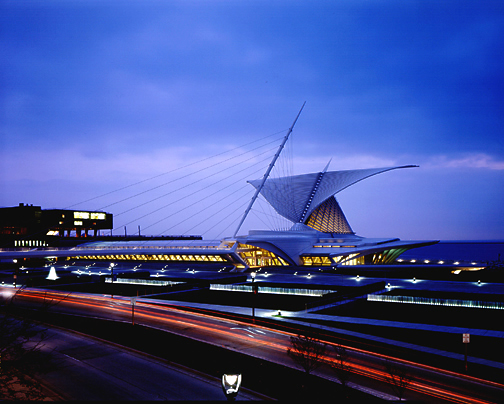 Milwaukee Art Museum – The Calatrava-designed Quadracci Pavilion, the first Calatrava-designed building to be completed in the United States, first opened to the public May 4, 2001. On that date the museum opened the new exhibition galleries, larger museum store and auditorium in the Quadracci Pavilion along with the completely renovated and reinstalled permanent collection galleries. (Via Joe Smith) 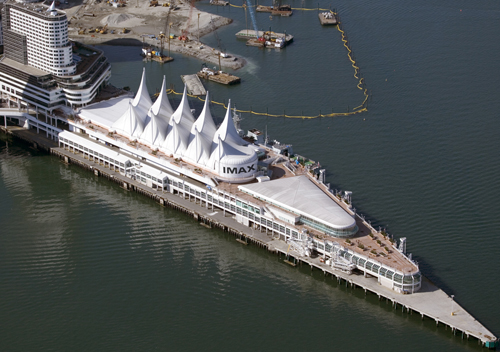 Canada Place –  Constructed for Expo 86 as the pavilion for Canada and was the only venue for the fair that was not at the main site on the north shore of False Creek. It can be reached via the SkyTrain line and the nearby Waterfront Station subway terminus. The striking white sails of the building has made it a prominent landmark for the city, as well as drawing comparisons to the Sydney Opera House in Sydney, Australia. (Google Earth View)

Join the 86,919 members that receive our newsletter.

This website uses cookies to improve your experience while you navigate through the website. Out of these, the cookies that are categorized as necessary are stored on your browser as they are essential for the working of basic functionalities of the website. We also use third-party cookies that help us analyze and understand how you use this website. These cookies will be stored in your browser only with your consent. You also have the option to opt-out of these cookies. But opting out of some of these cookies may affect your browsing experience.
Necessary Always Enabled
Necessary cookies are absolutely essential for the website to function properly. This category only includes cookies that ensures basic functionalities and security features of the website. These cookies do not store any personal information.
Non-necessary
Any cookies that may not be particularly necessary for the website to function and is used specifically to collect user personal data via analytics, ads, other embedded contents are termed as non-necessary cookies. It is mandatory to procure user consent prior to running these cookies on your website.
SAVE & ACCEPT
{"Tags":["architecture","design","Featured","ocean","Ships"],"Categories":["Blog"],"Excerpt":"gCaptain searches the web each week to bring you the world’s most interesting and inspiring ships, but you don’t need to be a naval architect to design an imaginative vessel...."}