Welcome to this 186th edition of Maritime Monday.

This week’s photos come from my recent trip to Piraeus, Greece: 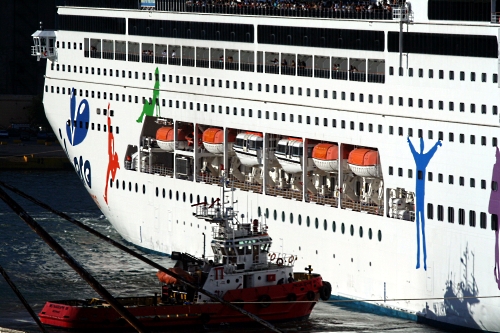 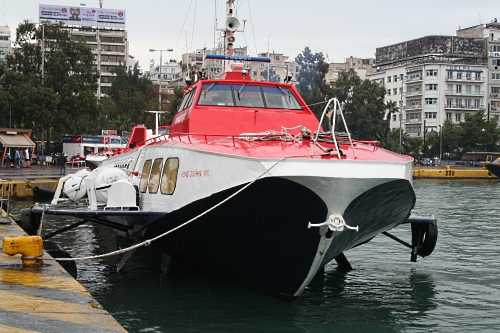 As always, you’re encouraged to send any interesting photos that you have for inclusion in a future edition.

gCaptain has “15 Incredible Shipyard Photos and Pictures“. One of them is not what it claims to be…

The BBC has the long awaited pirate escalation due to anti-piracy efforts in “Ransom demanded for yacht couple“.

Explaining the decision to set the ransom at $7m, the caller said: “Nato operations had a lot of negative impact here.

“They have destroyed a lot of equipment belonging to the poor local fishermen.

“They arrest fishermen and destroy their equipment.

“In defiance to our local administrations, they illegally transfer the fishermen to their own prisons and prisons of other [foreign] countries.

“So when you consider the damage and all the people affected we say the amount is not big.”

BitterEnd Blog has the very cool “Open Source Chart Plotter: OpenCPN“. Got a laptop? You can cheaply turn it into a GPS Plotter, charts and all.

US Naval Institute Blog has a good cause with “And the Winner is…Wounded Warriors: Valour IT“. From there, you can donate via the link they have on the right.

At the heart of their story is the bizarre fact that there are more fine fish swimming in the tiny tanks than there are in the surrounding sea.

Having overfished and polluted its own waters to the point where they are home mainly to great ghosts of the past, Hong Kong now imports up to 90 percent of its seafood.

The Times of Malta has “Scientists agree on tuna ban“. Maybe more people should remember the story of The Lorax. Not only that, but it is good to remember that the Japanese had been stealing many times their annual quota of tuna for decades, so they have nobody to blame but themselves for facing a tuna ban.

The scientific consensus is that a suspension of commercial fishing is the only measure that will give the species the chance to recover.

The verdict comes just days before the start of ICCAT’s annual conference on the 2009 tuna season in Brazil and is expected to have a major influence on the conference outcome. ICCAT compiles fishery statistics from its members and provides a mechanism for contracting parties, including Malta, to agree on management measures.

Maltese fishermen and the tuna industry are fiercely opposed to a total ban of international trade in tuna as they depend heavily on this fishery. It is estimated that, in 2007, Malta exported â‚¬100 million worth of tuna to the Japanese sushi market and local fishermen claim tuna amounts to two-thirds of their annual income.

Time Magazine has the story: “The Hunt for Tuna: A Tough Catch“. Engineers are pictured preparing to dock the damaged MSDF escort ship Kurama at the port of Moji in Kitakyushu, Fukuoka Prefecture, on Wednesday morning. (Photo courtesy of the Japan Coast Guard)

MarineLog has “Royal Caribbean takes delivery of Oasis of the Seas“.

Lloyd’s List has “Arctic Sea to be returned to owners“.

The Malta Maritime Authority said that after a handover outside territorial waters, it expects a new crew to board the ship and to request permission for the ship to enter its homeport of Valletta.

However, the statement does not reveal who is now considered the owner of the vessel. Solchart, the company previously understood to own Arctic Sea, reportedly declared itself bankrupt after the incident. The MMA did not immediately respond to a telephone call requesting clarification on the point.

Flags of Convenience has photos: “The MV Arctic Sea is seen berthed in Senglea“.

The Daily Green has a very impressive mess with “Offshore Oil Leak: 400 Barrels a Day, 2 Months … and Counting – See what an offshore oil spill looks like from space. … more than 2 months after an offshore oil rig began leaking.“ Chaotic Synaptic Activity has “10/25/1944: The Last Great Naval Battle“. It was the Battle Off Samar.

The Maritime Executive has “California Dreamin’ or West Coast Nightmare?“

The Suisun Bay Reserve Fleet is one of three anchorages maintained by the Department of Transportation’s Maritime Administration for national defense and national emergency purposes. The others are located at Hampton Roads, VA and Beaumont, TX. It is no secret that there are currently 84 non-retention ships moored in the Reserve Fleet, of which 57 are located in Suisun Bay. That the lion’s share of these decrepit vessels are located in California should also come as no surprise to anyone, since the Golden State has for years made it far too difficult to remove the vessels. Facing unreasonable restrictions on what work could be done, under what conditions and how that was to be accomplished, MARAD reluctantly turned its attention to similar vessels in the other two fleets.

HAWSEPIPER: The Longest Climb has photos marking the end of the USS SAIPAN as she heads for the breakers in Taxas in “bye bye then“.

Kennebec Captain makes the case for the defense in “Are Car Ships Ugly?“

Ship-owners and KG funds are bracing for further falls in charter rates and rising lay-ups as cargo volumes slow to a seasonal low and shipyards deliver vessels ordered during the 2006-2008 bull market.

Authorama has the old book “The Old Merchant Marine – by Ralph D. Paine“. (I had run across the quote while attending this year’s USMMA homecoming as one of the classes had the quote emblazoned on their reunion shirt.)

“His reply to them was, ‘then you shall be sure to die, for if they do not kill you I will, so sure as you persist in any such cowardly resolution,’ saying at the same time, ‘OUT SHE GOES, OR DOWN SHE GOES.’”

By this resolute and determined conduct he kept the men to their duty and succeeded in accomplishing one of the most daring enterprises perhaps ever attempted.

An immortal phrase, this simple dictum of first mate Hudson of the Betsy, “Out she goes, or down she goes,” and not unworthy of being mentioned in the same breath with Farragut’s “Damn the torpedoes.”

Sea * Fever has nuclear icebreaker video with “Moving Day at the North Pole“.

The crew depends, and yes takes for granted, that the wheelhouse watch is taking every measure necessary to negotiate the transit in a safe and professional manner. So it would follow that it’s absolutely unacceptable to have one’s head buried in an internet search, texting frenzy, or passionate call to their significant other.

The Old Salt Blog has the exhibit “The Edge of New York: Waterfront Photographs“.

Notes From the Wooden and Iron World has photos of “An example of a deck prism on the Falls of Clyde“.

59° 56′ N has “Shipping media, tear down this pay wall!” I do not think this is likely anytime soon. After all, the main target market of these publications are shipping companies.

thedailygreen has river photos with “Plunge Into Brazil’s Living Aquarium“.

Marenostrum has photos of “Jenny’s Side Party“. 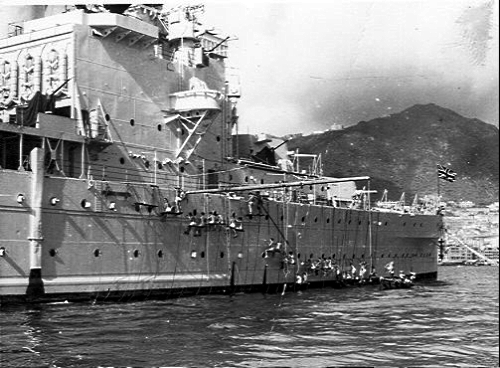 The girls were very popular and adept with a paint brush. Their pay consisted of spare food, bits of rope, tin, bottles, in fact anything that would usually have been jettisoned overboard.

The Misunderstood Mariner has the difference “Ocean Liners vs. Cruise Ships“.

Watts Up With That? has “UK Met Office backpedals on Arctic Ice – “…unlikely that the Arctic will experience ice-free summers by 2020.”” as their estimate has been pushed back 40 – 60 years…

Analysis of the 2007 summer sea-ice minimum has subsequently shown that this was due, in part, to unusual weather patterns. Arctic weather systems are highly variable year-on-year and the prevailing winds can enhance, or oppose, the southward flow of ice into the Atlantic. Consequently, the sea ice has not declined every year, but has shown considerable variability — both in extent and thickness.

Global Post has “Explorer Ernest Shackleton loved his Scotch whisky. And he left a stash at the bottom of the world.” It was found in 2006.

YouTube has video: “carnival legend collision“. The ships were the CARNIVAL LEGEND and the ENCHANTMENT OF THE SEAS. More video of this accident here, here and here. The comments, including instructions for the Captain ,by the passengers are classic!

fifty mph winds nudge our ship against another ship in Cozumel.

US includes pirate-kill clause – CONGRESS has authorised $10Bn for the US Coast Guard’s fiscal 2010 budget – in a bill that includes immunity for commercial US seafarers who kill or wound pirate suspects.

Left out of this budget – which passed the House, 385-11 on 23 October – was language seeking to amend the Jones Act to make foreign refits more difficult.

House Transportation Committee Chairman James Oberstar said: “Congress has added new missions for the Coast Guard, but without increasing personnel or funding. [This legislation] will enable the Coast Guard to carry out its many missions.”

The legislation also directs the US to negotiate international agreements through the IMO to provide liability exemptions in other countries for the use of force by mariners, vessel owners, operators and masters and allow armed US crews to enter foreign ports.

After the Senate passes a version of the bill, the two can be combined into a single bill. – Fairplay Homepage (Used with Permission)

Panama to expel detainees – THE PANAMA Register will immediately cancel registration of any vessel detained by any member state of the Paris MoU before the end of this year.

The Panama Maritime Authority (AMP) called the stricter policy a response to “multiple detentions of our fleet, which has been taking place at the Paris MoU, creating a disagreeable image to the Panamanian registry”.

The AMP’s previous policy was automatic cancellation of any vessel 20 years or older that had been detailed twice in the Paris MoU during a six-month stretch.

The new policy, which began 14 October, was not widely publicised but was cited in an alert by class society Lloyd’s Register yesterday.

LR noted that a vessel’s “certificates, registration, radio station licence and other documents issued by the AMP will become invalid. The vessel will not be able to trade until a change of registration can be effected.”

The immediate pulling of Panama flag status could also risk a ship’s class status “due to the links between classification and statutory certification established in SOLAS and class societies regulations”, cautioned LR. – Fairplay Homepage (Used with Permission)