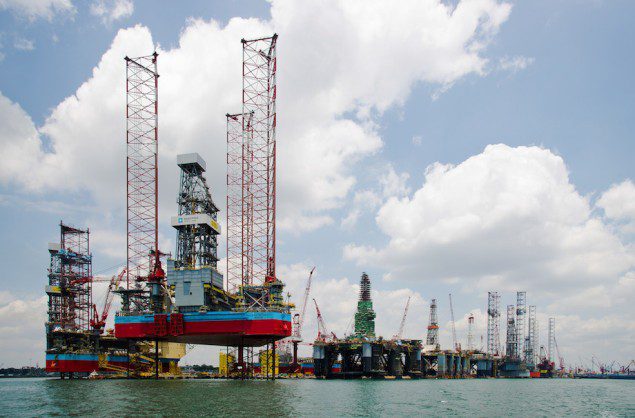 Maersk Drilling this week officially named the jack-up formerly known as B331 during a star-studded ceremony at the Keppel FELS shipyard in Singapore.

With a leg length of 206.8 m (678 ft), the “XL Enhanced” jack-up is the world’s largest and the first of four ordered by Maersk Drilling.

Mrs. Karen Tiffen, wife of Total E&P Norge Managing Director, Martin Tiffen, had the honor of naming the ultra harsh environment rig in the presence of the Guest of Honor Mr. Lui Tuck Yew, Minister for Transport in Singapore, as well as a number of dignitaries from Maersk Drilling, Keppel and Total.

So without further ado… introducing the Maersk Intrepid. After delivery from the yard, Maersk Intrepid will mobilize to the North Sea and commence a four year firm contract with Total E&P Norge AS for drilling the demanding and complex wells on the Martin Linge field development in the Norwegian North Sea. The contract also includes four one-year options and has an estimated contract value of $550 million. Maersk Drilling on the XLE design:

Uptime and drilling efficiency are maximized through dual pipe handling. While one string is working in the well bore, a second string of e.g. casing, drill pipe or bottom hole assembly can be assembled/disassembled and stored in the set-back area, ready for subsequent transfer for use in the well bore thus reducing the non-productive time. The drill floor features Multi Machine Control – a fully remote operated pipe handling system allowing all standard operations such as stand building and tripping to be conducted without personnel on the drill floor thus ensuring a high level of consistency across crews and an improved efficiency. “With the naming of the Maersk Intrepid, we are opening a new chapter in Maersk Drilling’s Norwegian history. We have invested in the Maersk Intrepid and its three sister rigs in order to continue to grow and leverage our market leading position in Norway. The Maersk Intrepid is the first of the four rigs being delivered and I am very pleased that it is going to Norway to work for one of our key customers, Total E&P Norge AS,” says Claus V. Hemmingsen, CEO of Maersk Drilling and member of the Executive Board of the A.P. Moller – Maersk Group.