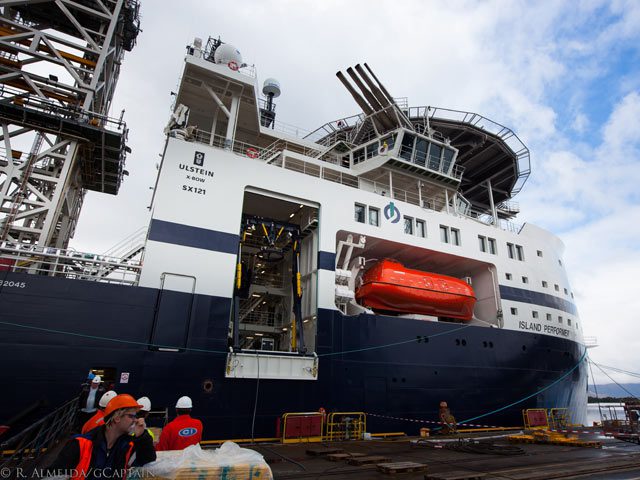 Update 8 July 2014: The Island Performer has been delivered today to her new owner, Island Offshore.

Island Offshore’s latest well intervention vessel Island Performer was getting the last of its outfitting completed at the Ulstein Verft Shipyard in Ulsteinvik, Norway when we visited in mid-June 2014.

The vessel is an Ulstein SX121 design and is outfitted to conduct subsea inspection, maintenance and repair, well intervention and ROV operations while utilizing a 250-ton active heave compensated crane and a 300-ton, 31-meter tall Module Handling Tower.  The vessel also has two moonpools and carries two work-class ROVs which can be simultaneously deployed via the ROV moonpool and a starboard-side ROV launching A-frame. None of the cable for the main crane is reeled inside the crane itself, but rather below-decks.

Having 3000 meters of cable that is as wide in diameter as a grapefruit spooled above the main deck would create a significant stability problem for the vessel and is the primary reason for it being stored below according to Håvard Stave, Sales and Projects Director at Ulstein. The hydraulic hoses pictured below power the active heave compensation for the 250 ton crane which is pressurized by a half dozen or more large nitrogen canisters mounted inside the crane machinery space. Looking up the Module Handling Tower (MHT) which measures 8 meters by 8 meters at the base and rises 31 meters above the main deck.  This tower is used for well intervention and a number of other subsea activities. The primary moonpool (above) and the operators shack (below) The view from the bridge looking forward (above) and aft (below).  The Island Performer is DP3 equipped from MT. ROV umbilical cable is being spooled on to the vessel (below) Pictured below is the drydock at Ulstein Verft shipyard.  The dock itself is particularly interesting in that the sides of the drydock are exposed bedrock.  In the building in the background with the red roof is where Ulstein’s naval architects and marine engineers have their offices and to the right is the covered dry dock where the SX121-design PSV Blue Storm is under construction (below). The SX121 platform supply vessel has been a remarkable success story for Ulstein.  The company built two on spec via their investment vehicle Blue Ship Invest with the idea that they would be well-received by the market and were subsequently placed on charter with Statoil.

Soon after, positive reviews came in and Nordic American Offshore ordered seven of the vessels.  In total, around 22 of the ships have been ordered by Ulstein’s clients around the world, however the unofficial number is closer to 3o. Join the 68,501 members that receive our newsletter.