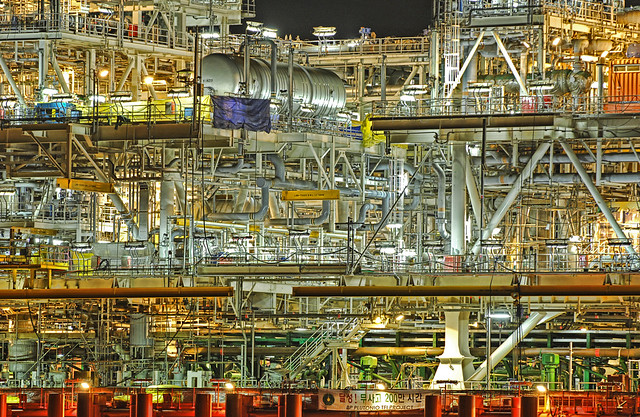 Today’s ship photo of the day is an extremely high detailed HDR Image the FPSO (floating production, storage and offloading) vessel constructed by Hyundai Heavy Industries Shipyard. According to the photographer,  L1GHT DR4W1NGS , the shipyard engineers were pulling an all-nighter because the lights were on at 1am when this shot was taken.

We are unsure exactly which FPSO this is but it could possibly be the BP Greater Plutonio, a super-large Floating, Production, Storage and Offloading unit built at HHI’s Offshore Yard on October 11, 2006.

The Greater Plutonio FPSO cost US$ 340 million to build and weighs 80,000 gross tons, or 360,000 deadweight tons. It measures 310 m in length, 58m in width and 32m in height. The FPSO’s hull can store two million barrels of crude oil, and top side equipment can produce and refine 200,000 barrels per day with living quarters to accommodate 120 crew members.