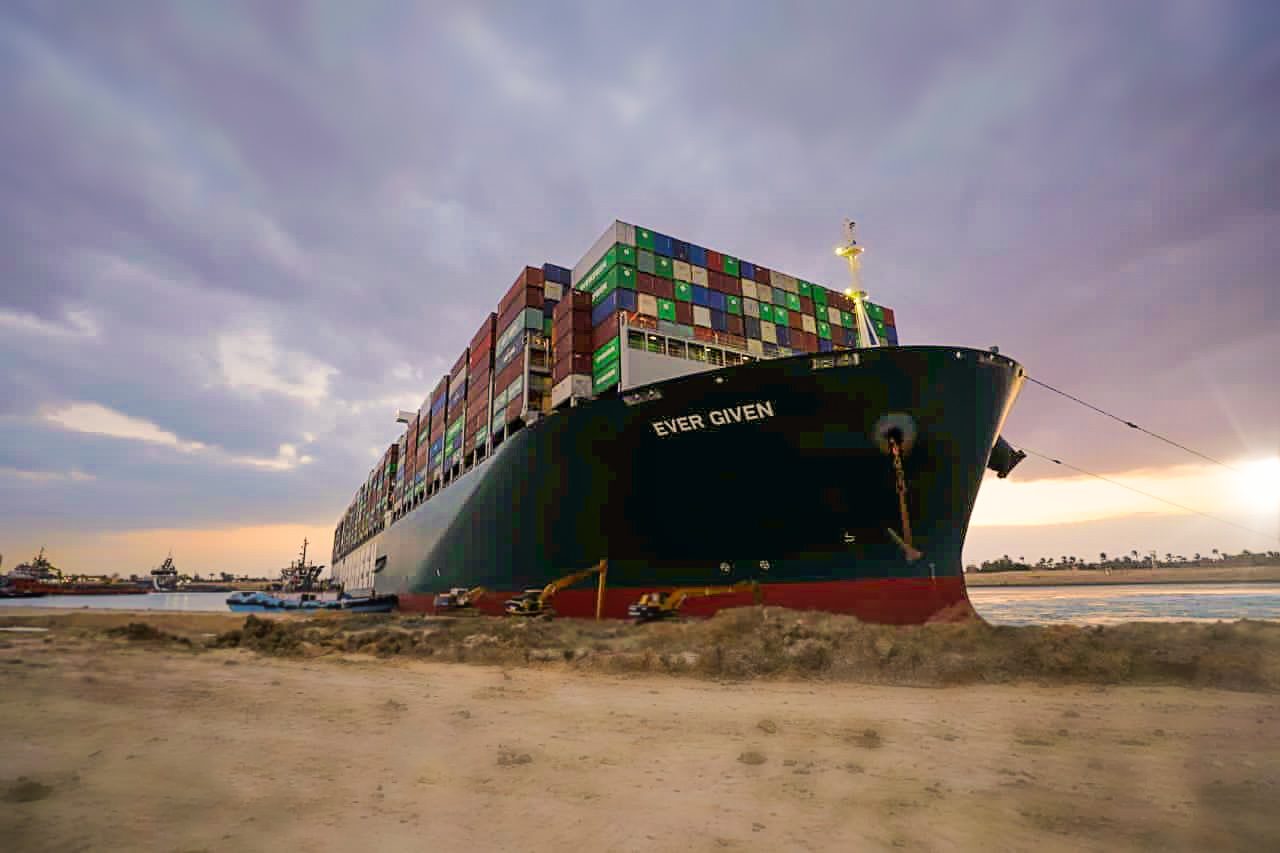 Stranded ship Ever Given, one of the world's largest container ships, is seen after it ran aground, in Suez Canal, Egypt March 28, 2021. Suez Canal Authority/Handout via REUTERS

Latest Ever Given Refloating Attempt Postponed

gCaptain Update: The Suez Canal Authority and salvors working to refloat the Ever Given will not attempt to pull the ship free Sunday night as they await the arrival of another high-powered tug, pinning hopes of refloating the vessel on Monday’s high tides.

“SCA has decided to postpone the next refloating attempt until sufficient tug power is in place,” shipping agent Leth Agencies said in its Twitter update on the salvage efforts. “TUG ALP Guard has already arrived. Second, TUG Carlo Magna, will arrive Monday morning. In lieu of the tide table, a likely time for the next attempt is Monday evening.”

The next high tides expected in Suez will occur at 11:42 a.m. Monday and 12:08 a.m. Tuesday local time, with the 12:08 high offering the highest tide of 7.0 feet, an increase of a little over 2 inches from the previous high. In this case, it seems every inch counts. -End

By Yusri Mohamed and Aidan Lewis

ISMAILIA, Egypt March 28 (Reuters) – Suez Canal salvage teams intensified excavation and dredging on Sunday around a massive container ship blocking the busy waterway ahead of attempts to refloat it, with two sources saying work had been complicated by rock under the ship’s bow.

Diggers were working to remove parts of the canal’s bank and expand dredging close to the ship’s bow to a depth of 18 meters (19.7 yards), the Suez Canal Authority (SCA) said in a statement.

There was no mention of new attempts to release the ship with tugs, though canal officials and sources had said they were hoping to take advantage of high tides on Sunday and Monday to dislodge the vessel.

A specialist tug registered in the Netherlands arrived and would join efforts to refloat the ship on Sunday evening, the ship’s technical manager Bernhard Schulte Shipmanagement (BSM) said.

Any operation to lighten the ship’s load would not start before Monday, an SCA source said, as salvage teams try to maneuver the ship free before high tides recede next week.

The 400-meter (430-yard) long Ever Given became jammed diagonally across a southern section of the canal in high winds early on Tuesday, halting shipping traffic on the shortest shipping route between Europe and Asia.

Shippers affected by the blockage may be offered discounts, Rabie said, adding that he believed investigations would show the canal was not responsible for grounding the Ever Given, one of the world’s biggest container ships.

Rescue workers from the SCA and a team from Dutch firm Smit Salvage have been weighing how much tugging power they can use on the ship without risking damage, and whether some cargo will need to be removed by crane in order to re-float it.

Experts have warned that such a process could be complex and lengthy. Rabie said he hoped it would not be necessary, but that Egypt would take up offers of international assistance if it did switch to that strategy.

A ballast tank at the bow of the ship has been damaged, and the vessel will have to be inspected once it is freed, two people familiar with the salvage operation said.

Suction pumps have been deployed to expel water from the tank, SCA sources said, and one of the sources said divers had been working to repair the hole.

Dredging has so far shifted at least 27,000 cubic meters of sand and mud from around the ship, the SCA said earlier on Sunday.

However, two SCA sources told Reuters that a mass of rock had been found at the bow of the ship, complicating salvage efforts. That appeared to be confirmed by the focus late on Sunday on digging to remove the lining of the canal around the ship’s front.

Soil experts are on site to advise on recovery efforts and a further dredger was expected to arrive by March 30, BSM said.

From the dredging done so far it was still unclear whether the ship was stuck on soft sand, compact sand or clay, which will determine how easily it may shift free, said one official involved in the salvage operation.

Two new and powerful tugs expected to be in use by Monday could provide a boost. “We believe that is what you are going to need in terms of horse power … to have a decent attempt, a decent chance of trying to float her,” the official said.

The latest efforts come after officials said some progress had been made on Friday and Saturday.

“The rudder was not moving and it is now moving, the propeller is working now, there was no water underneath the bow, and now there is water under it, and yesterday there was a 4-meter deviation in the bow and the stern,” Rabie told Egyptian state TV.

About 15% of world shipping traffic transits the Suez Canal, which is a key source of foreign currency revenue for Egypt. The current stoppage is costing the canal $14-15 million daily.

If the blockage drags on, shippers may decide to reroute their cargoes around the Cape of Good Hope, adding about two weeks to journeys and extra fuel costs.

A note from A.P. Moeller Maersk seen by Reuters said it had so far redirected 15 vessels around the Cape after calculating that the journey would be equal to the current delay of sailing to Suez and queuing.

The SCA has said it can accelerate convoys through the canal once the Ever Given is freed.