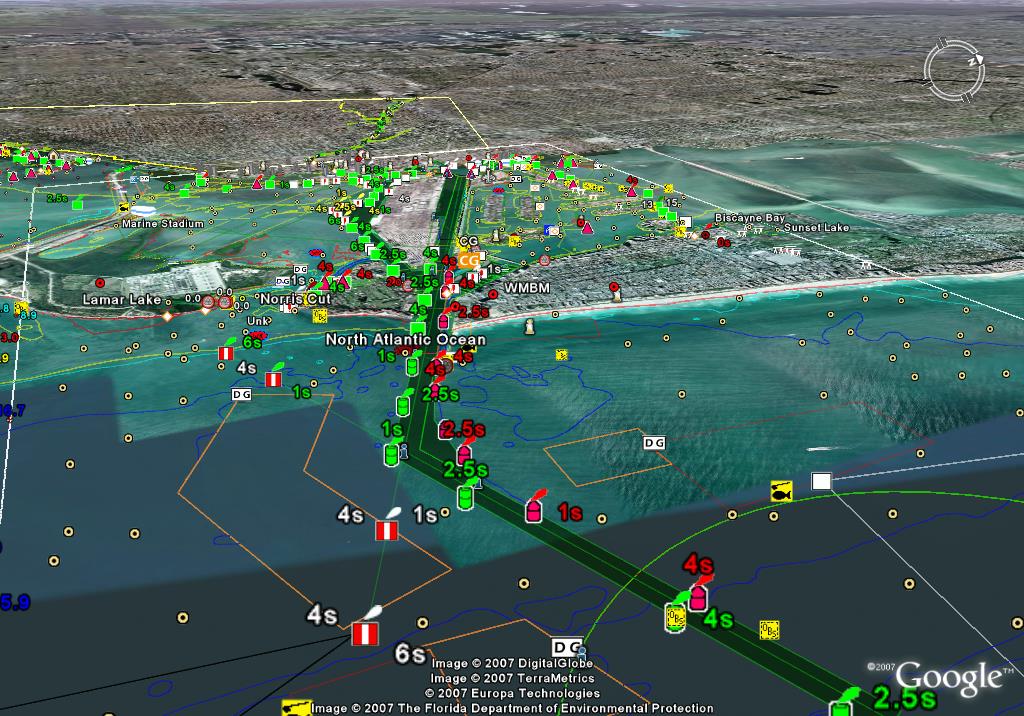 Last week we were pleased to bring you google’s announcement of ocean data inclusion in Google Earth. Today we bring you an interview with the leading google earth developer of marine products, Virgil Zetterlind of EarthNC. For those unfamiliar with Virgil’s work, the company translates marine charts into vector graphics for use in Google Earth. They also assist you in overlaying additional services like AIS based vessel tracking and marine weather charts. The result is a powerfull alternative to ECS products like Coastal Explorer or TADS.

Everyone seems to know the power of google earth, how does your product unleash this power for use on the water?

Similar to needing road data to create driving directions or plan road trips, EarthNC provides the navigation context critical for planning and conducting boating trips within the Google Earth environment.  Our core datasets are based on official government charting or reputable private chart data where government data is not available.  We also incorporate extensive weather layers, ocean forecasts, and point-of-interest reference information to give boaters a comprehensive picture of the environment.

We have seen your growth in the recreational market but is your product of use for the commercial mariner?
We believe EarthNC is of use for anyone with an interest in boating – whether recreational or commercial.  The combination of Google Earth imagery with EarthNC charting provides an unprecedented 3D view of port facilities, tricky channels, and shallow waterways.

Do you know of any ships using your product now?

EarthNC is currently used by a wide variety of commercial mariners for inland and blue water applications.  We have active user Captains using EarthNC on Gulf Crew-Boats, Boat Delivery service, sail and power charters, River Boats, ICW Tow Boats, and more.  We’ve been delighted to field calls direct from some well-known ships and learn that their crew are using EarthNC.  EarthNC is used at the US Merchant Marine Academy as part of their hands-on power boat navigation instruction.

Why did you choose google as your platform?

The choice of Google Earth allows EarthNC to concentrate on the development of top-notch, nautical themed content while leveraging Google’s multi-million dollar investment in worldwide imagery (and now Bathymetry with Google Earth 5).  Google Earth also allows us (and our users) to leverage a growing community of information providers who publish content in Google’s format.

How does it compare with currently available ECS solutions?

Feedback from captains indicates that they like EarthNC’s intuitive interface via Google Earth and price-point well below other PC/Mac based charting systems.  EarthNC is not as fully featured as more expensive systems in terms of autopilot support, radar integration, or advanced routing features, but we’ve found most boaters are more interested in the improved situational awareness that EarthNC provides via the Google Earth 3D viewpoint.

We were excited by Google’s recent announcement to support hydrographic charts, who does this benefit?

Google now supports 3D bathymetry (not charts per se) and will be updating it with high resolution sonar scans as data is made available by governments and private companies.  They have also enhanced Google Earth to support custom development of ‘Ocean’ aware content.  This is an indication that Google recognizes than many uses of our waterways and the importance to protect and preserve the marine environment.

Can your product integrate with other google earth plug-ins like Live AIS feeds and marine weather chart overlay?

Are there any features you would like google to add to their product?

We hope Google continues to add improved resolution 3D Bathymetry, especially in near shore areas.  We’ve asked that they consider a ‘ocean’ mode that would remove the ocean surface images so that 3D chart overlays would be visible above the water’s surface and that they consider a different color model for shallow water depths to better convey subtle depth variations near shore.

We are working to expand our chart coverage into the Bahamas, the Sea of Cortez, Canada, Europe, and the Pacific. We recently partnered with Marinas.com to offer a Coastal Aerial Photos layer in Google Earth featuring nearly 500,000 high-resolution waterway photos from around the world – all taken within the last few years.  We are working to capture more weather and coastal observations in Google Earth such as the NOAA PORTS system and more detailed tidal/current predictions for major US ports.

We thank Virgil for his time and encourage you to visit EarthNC.com to view the video demonstration and download the selection of free charts.