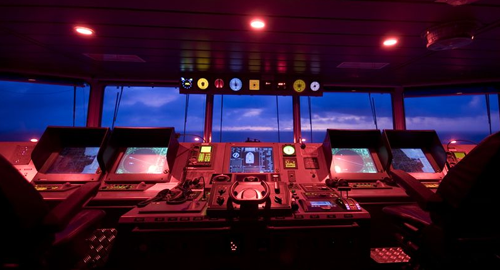 Since early this year, ships running at least one make of ECDIS can download navigational charts and chart updates at sea, via Internet download. OK, last year’s wreck won’t show up on ENC updates from hydrographic offices for another two or three years yet anyway, but this is progress, damnit. Don’t question it.

DNV’s OK’d it, as well. They will type-approve an ECDIS that uses Internet connections for updates, provided a) there is a firewall, b) there is an anti-virus strategy, and c) there is an electrical Internet kill switch. Of course, all of this assumes that the greatest threat is from outside.

I’ve heard from more than one source that this is not the case. One major shipping company had an ECDIS crash because the officers were using it to surf the Internet while en route (perhaps they were studying the company’s HSE policy online). The fuming manager said that they would fix this by allowing the machine to access only one url, that of the chart update provider.

Is it a shock to imagine an officer bored out of his mind jimmying the ECDIS to serve him YouTube videos? To me it wouldn’t even be a shock to hear that the flight crew of an airliner overflew their destination because they were tweeting about Justin Bieber. Better that than arguing about airline policy.

There’s a fear of technology at work here. It’s the same kind of thing that led employers ten years ago to hesitate to give their office workers Internet access. It’s alive today when they cut off access to YouTube, Facebook or Skype (I was told by one executive that his company wouldn’t let him use the last one because “it’s free and it works, unlike our enterprise solution.”)

The fellow running the IMO’s e-Navigation working groups told me they’re putting the focus on what they call a “single window”. Let’s not split hairs here; that’s the ECDIS. This window’s going to be full of good stuff, and soon. And it’ll be up to every mariner to use it as he likes. In fact, I hope that seafarers come equipped with their own system in the future (like Norwegian pilots).

Imagine when a master can just show up with her ECDIS under her arm, plug into any ship and she has everything in the digital and physical world she needs, right there. A reality, you think?