under tow in the Bay of Biscay, February 1, 2016. Photo credit: Marine Nationale

Update (Feb. 2, 2016): The tug Centaurus towing the Modern Express entered Spanish waters overnight as the convoy approached the port of Bilbao at a speed of 3 knots. The convoy was located 29 nautical miles northeast of Bilbao as of 09:00.

Overnight, the French Frigate Primauguet and emergency tug Abeille Bourbon both left for their homeport in Brest.

Arrival of the convoy in Bilbao could be soon as Tuesday night.

Update (Feb. 1, 2016): The Modern Express no longer poses a threat to shore as the tug Centaurus continues to tow the stricken cargo ship further out to sea, Maritime Prefect Atlantic said in an update Monday. The convoy reached about 35 nautical miles from nearest land at 18:00 and was making about 2 knots.

Spanish authorities agreed to provide a place of refuge for the ship at the port of Bilbao. Arrival at the port is expected Wednesday morning.

Earlier: A salvage team was successful in their last ditch attempt to save the adrift cargo ship Modern Express from running aground along the French coast.

The ship was taken under tow Monday morning at 11:45 a.m. after a four-man team from SMIT Salvage boarded the vessel by helicopter and were able to connect a tow line.

The ship is now under tow by the tug Centaurus, which is towing the vessel out to sea at a speed of 3 knots. The convoy was located 24 nautical miles from the coast as of 1:15 p.m. A video of the ship under tow is at bottom of this post.

Weather on scene improved Monday allowing the operation to take place, with winds of Force 4 (20 to 28 km / h) and waves of 3 to 3.5 meters.

The salvage team was lifted off the vessel by a French Navy helicopter before the tow commenced.

It is important to note that the Modern Express is not out of danger yet, as the tow line could break at any moment.  The vessel is also still listing severely, and salvors will need to seek calmer waters before any attempt to right the ship.

Earlier attempts to tow the vessel on Friday and again Saturday were thwarted by heavy weather, leaving the ship drifting towards the French coast. Weather on Sunday prevented salvors from even boarding the vessel, making Monday’s attempt their last chance to rescue the vessel before running aground somewhere in vicinity of Landes department (county).

The Panamanian-flagged pure car and truck carrier (PCTC) Modern Express first developed a severe list on Tuesday while underway in the Bay of Biscay about 200 nautical miles from the southwest of the tip of Penmarch, France. From there the ship drifted eastward into French waters, covering hundreds of miles before the tow commenced some 24 nautical miles from Arcachon, France on Monday morning. 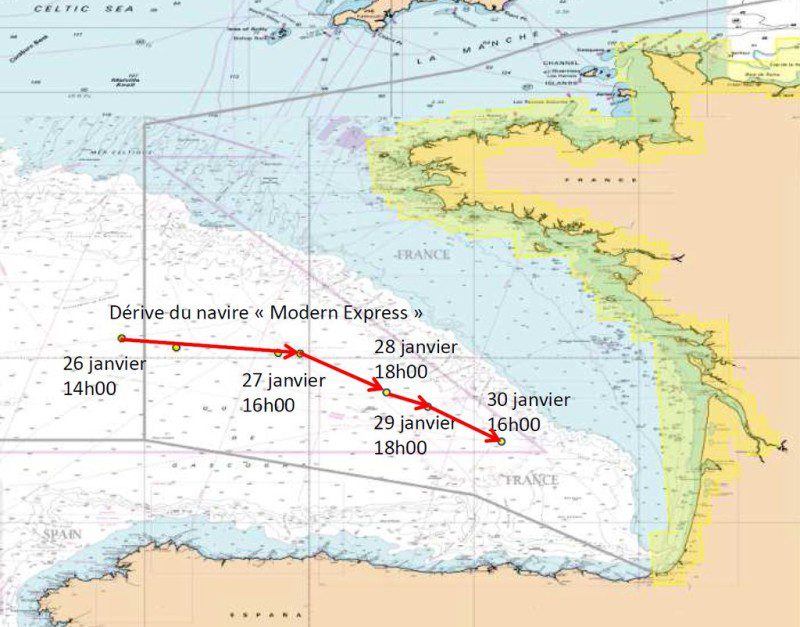 The vessel is carrying 3,600 tons of timber and construction equipment, which is believed to have shifted in heavy seas, as well as some 300 tons of diesel fuel.

The Modern Express’s owner Cido Shipping hired SMIT Salvage to save the ship.

The incident occurred as the Modern Express was sailing from Gabon, Africa to the port of Le Havre, France.

Responding to the incident has been two contracted tugs, Centaurus and Ria Vigo, the French emergency tug Abeille Bourbon, the French Navy frigate Primauguet with a Lynx helicopter, and the AHTS Argonaute.

There have been no reports of pollution.