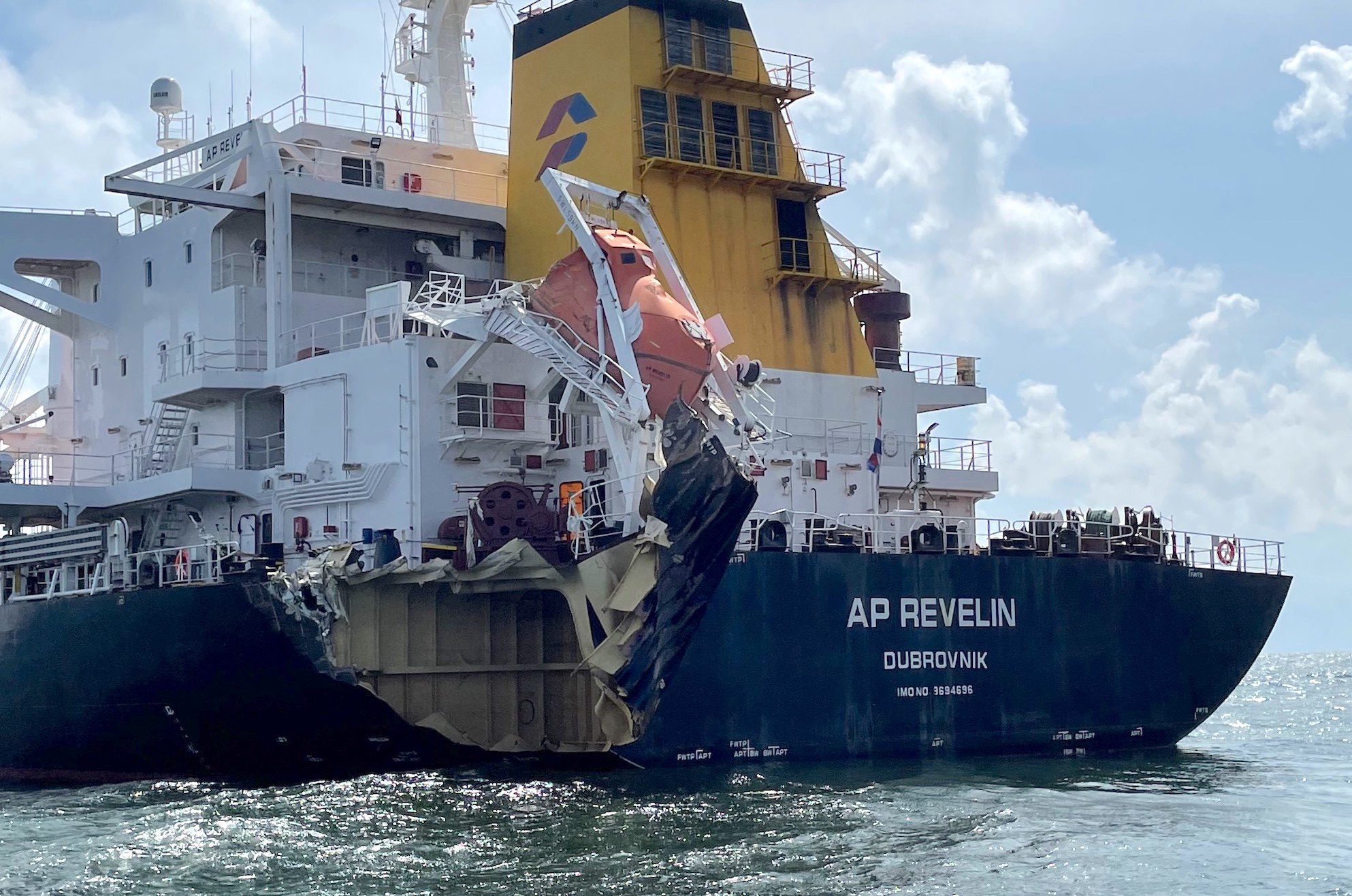 A cargo ship and bulk carrier sustained damage following a collision in Sabine Pass ship channel over the weekend after one of the vessels suffered a loss of steering.

A spokesperson for the Coast Guard tells gCaptain the Damgracht was inbound at Sabine Pass via the Port of Beaumont, when the crew noticed an engine alarm and shut down their engine as a preventative measure. This resulted in a loss of power/steering, and the vessel collided with the outbound AP Revelin.

The M/V Damgracht was carrying cement at the time of the accident.

Following the collision, both ships anchored safely in the Sabine Anchorage and were undergoing damage assessments and planning for repairs. No injuries or pollution were reported.

Coast Guard Marine Safety Unit Port Arthur personnel and the National Transportation Safety Board are conducting a marine casualty investigation into the incident.

More photos of the damage are below:

Join the 85,803 members that receive our newsletter.

An electrical failure caused a bulk carrier to lose of steering and crash into a barge near New Orleans last year, resulting in an estimated $6 million in damages, the... The Australian Transport Safety Bureau (ATSB) has issued safety recommendations to the managers and parent company of the cargo ship BBC Rhonetal following an investigation into a fire in the...

The Netherlands’ Government says it is pledging an additional $7.5 million to the UN for the salvage of the floating oil storage tanker FSO Safer in the Red Sea off...

This website uses cookies to improve your experience while you navigate through the website. Out of these, the cookies that are categorized as necessary are stored on your browser as they are essential for the working of basic functionalities of the website. We also use third-party cookies that help us analyze and understand how you use this website. These cookies will be stored in your browser only with your consent. You also have the option to opt-out of these cookies. But opting out of some of these cookies may affect your browsing experience.
Necessary Always Enabled
Necessary cookies are absolutely essential for the website to function properly. This category only includes cookies that ensures basic functionalities and security features of the website. These cookies do not store any personal information.
Non-necessary
Any cookies that may not be particularly necessary for the website to function and is used specifically to collect user personal data via analytics, ads, other embedded contents are termed as non-necessary cookies. It is mandatory to procure user consent prior to running these cookies on your website.
SAVE & ACCEPT
{"Tags":["incident photos","sabine pass collision","u.s. coast guard"],"Categories":["Accidents"],"Excerpt":"A cargo ship and bulk carrier sustained damage following a collision in Sabine Pass ship channel over the weekend after one of the vessels suffered a loss of steering. Coast..."}