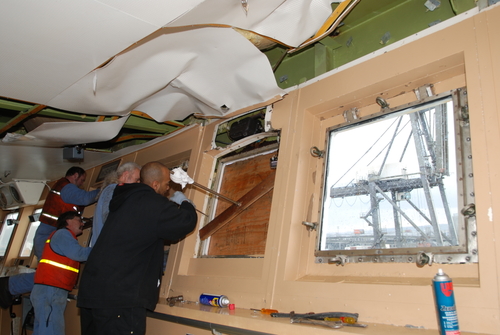 A harrowing weather story from the Pacific Northwest. Washington State Department of Ecology’s Website tells us;

The Kauai, a 720-foot container ship operated by Matson Lines, was sailing near Cape Flattery when it was smashed by a large ocean swell. The waves broke out the wheelhouse windows, damaged electronic systems and knocked out the ship’s primary steering system.

The Crowley Maritime-operated Gladiator met the container ship at the mouth of the Strait of Juan de Fuca and escorted her into Port Angeles. There, the Gladiator’s crew handed the ship off to another tug so the Gladiator could return to keep watch at Neah Bay. The Kauai is currently heading to Seattle for repairs.

“We dodged a bullet with today’s assist,” said Dale Jensen, manager in charge of Ecology’s Spills program. “With the incredibly stormy weather here on land, one can only imagine how tough the conditions are at sea.”

He said, “Having the rescue tug stationed at Neah Bay during the winter means we can assist ships in distress and prevent catastrophic damage to our valuable marine resources.”

The state has contracted to station a rescue tug at Neah Bay since spring of 1999. The tug has stood by or assisted 34 ships that were disabled or had reduced maneuvering or propulsion capability while transporting oil and other cargo along the coast and through the Strait of Juan de Fuca. The actions helped ensure the ships didn’t drift onto rocks and spill oil.