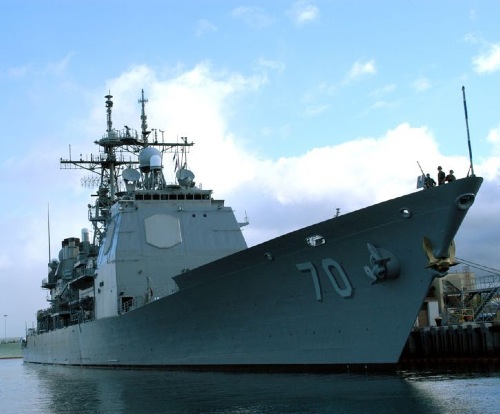 Most of us are aware that a US warship is currently stationed for an attempt to shoot down a damaged satellite. Military officials say the satellite is carrying highly toxic hydrazine rocket fuel that could be dangerous if it fell on a populated area.The ship behind the scenes is the USS Lake (CG-70.)  She is a Ticonderoga-class guided-missile cruiser in the United States Navy. She is named for the decisive USN victory in the Battle of Lake Erie during the War of 1812. Lake Erie is a baseline 4 Ticonderoga class ship, with integrated AN/UYK-43/44 computers (in place of UYK-7 and UYK-20) and superset computer programs originally developed for the Arleigh Burke-class guided missile destroyers. Lake Erie also has an improved UYS-20 data display system and various decision aids, as well as the SQS-53C sonar and the SQR-17 sonar data processor.

In August 1998, as part of the Aegis Ballistic Missile Defense System, modifications were made aboard Lake Erie and Port Royal, which consisted of modifications to the Aegis weapons system on board Ticonderoga-class cruisers; a modification, known as linebacker, and which uses specialized computing and radar software and hardware to provide improved tracking and reporting capabilities, and when coupled with the SM-2 Block IVA, intercept Tactical Ballistic Missiles (TBM). Ballistic missile testing afforded Port Royal and other participants an opportunity to flex the capabilities of the current Aegis weapon system against a live ballistic missile target and gave a representation of how the modified system tracks and destroys TBMs.

This post was written by Richard Rodriguez, Rescue Tug Captain, and US Coast Guard approved instructor for License Training. You can read more of his articles at the BitterEnd of theUPDATE:

CNN tells us the mission was a success. They write:

The first opportunity for the Navy to shoot down the satellite came about 10:30 p.m. ET Wednesday. The plan included firing a missile from the USS Lake Erie in the Pacific Ocean west of Hawaii to destroy the satellite.

“A network of land-, air-, sea- and space-based sensors confirms that the U.S. military intercepted a non-functioning National Reconnaissance Office satellite which was in its final orbits before entering the Earth’s atmosphere,” a Department of Defense statement said.

Video of the launch: