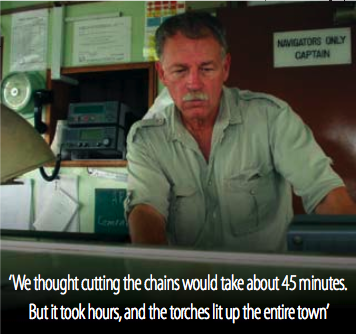 (Note: This article was originally published in Dec 2007)

We have taken a look at piracy in the Strait of Malacca and showed you how criminal organizations scrub a stolen ship’s documents now we turn our attention on finding and repossessing these vessels.

The primary company in recovering hulls in North America is New Orleans based VessEx. Here is a clip about VessEx from

Only a few repo men possess the guile and resourcefulness for such a job. One of them is F. Max Hardberger, of Lacombe, La. Since 1991, the 58-year-old attorney and ship captain has surreptitiously sailed away about a dozen freighters from ports around the world.

“I’m sure there are those who would like to add me to a list of modern pirates of the Caribbean, but I do whatever I can to protect the legal rights of my clients,” said Hardberger, whose company, Vessel Extractions in New Orleans, has negotiated the releases of another dozen cargo ships and prevented the seizures of many others.

His line of work regularly takes him to a corner of the maritime industry still plagued by pirates, underhanded business practices and corrupt government officials, waters the Aztec Express sailed right into.

The saga began in 2003 when the vessel’s Greek owner died and his company did not keep up payments on a $3.3-million mortgage. Read More…

Here is the video: