A British sailor has died after being washed overboard from a yacht while participating in the Clipper Round the World Race. According to a statement by the race organizer, Simon... WATCH: Drone Films as Luxury Yacht Gets Destroyed by Fire

A 102-foot luxury yacht possibly worth $24 million has been completely destroyed after it caught fire while dry docked at a San Diego boat yard, and it was all caught... A crewmember from an around-the-world amateur yacht race is lucky to be alive after spending 90 minutes in the stormy Pacific Ocean after falling overboard. The race organizers said that... Watch as solo round the world yachtsman Alex Thomson, the same guy who brought us Blast Rocks Luxury Yacht Off New Jersey Coast… Or Does It? [UPDATE]

UPDATE (13:00 pst, Tues): Listen to the unbelievable audio recording of the “Blind Date” hoax call. UPDATE (07:15 pst, Tues) The Coast Guard is now investigating this as a hoax... The Ugly Truth About Yacht Insurance Photo: Daniel Forster/Rolex Rambler 100, holder of the transatlantic record and one of the favorites to win this year’s Fastnet Race, capsized this evening after losing her keel in moderate...

Dear Santa: I would like a Perini Navi so I can go explore the arctic… please.

The naval architects at Perini Navi have done a spectacular job with this new 55 meter Picchiotti Ice-Class Motor Yacht.  The raised forward bulwarks mean this yacht was meant for... The Perini Navi Group has launched a new series of 60 mt sailing yachts and has already signed two sales contracts for a total value of more than 70 million... At the Newport Shipyard…

We were docked next to this rather conspicuous beast while racing in the New York Yacht Club Annual Regatta this past weekend. Let’s see how quick you all can tell... This interesting pic was brought to our attention by albertpachino in the gCaptain forum with the title “Gotta Love Those Yachties – A Pic Says 1,000 words!”.  It sure does… 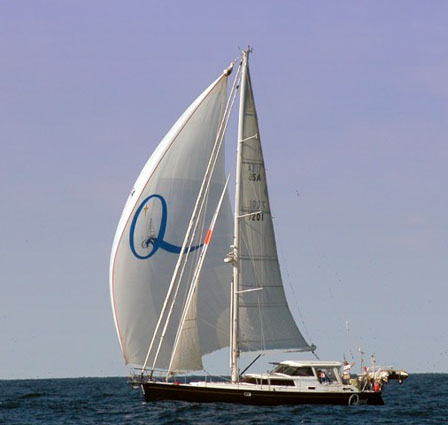 WARNING TO: U.S. Registered Yachts and Sailing Vessels The U.S. Coast Guard strongly advises against all operation of and travel by U.S. yachts and sailing craft, or by U.S. citizens...

The Eastport 32 – a powerboat for sailors

I just returned from a few weeks in Annapolis, Maryland where I had the opportunity to catch up with my friend Tom Weaver, a career yachtsman with more enviable sea...

The United States Naval Academy won the MacMillan Cup Intercollegiate Regatta this past weekend in convincing fashion with 6 bullets in 8 races.  This regatta is hosted every fall by...

We can’t help but be fans of mega yachts here at gCaptain.com and over the years have done a fair share of covering them on the blog.  Whether it’s the...

It may just be a concept design, but this is truly an avant-garde project that questions the balance of form and function in traditional yacht/sailboat making.  Oh yeah, and it...