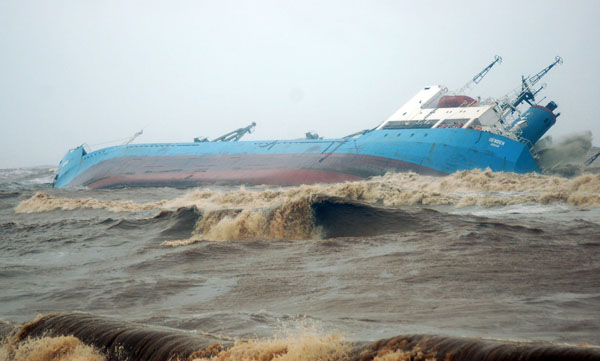 A ship reportedly heading to Dubai has run aground on a beach in Mangalore India. Three people are confirmed dead the others have been rescued after jumping from the ship. This seems very similar to the Pasha Bulker incident in Newcastle Australia but the details are still scarce. In a story titles “Mangalore: One Person Still Missing from Sunken ‘DenDen’ Ship” the local newspaper Daijiworld tells us:

‘DenDen’ ship from Eastern African country Eritrea was on its way to
Dubai after loading furnace oil from KISKO on Tuesday June 19. But no
sooner it left the shore, a technical snag was reported. As a result
ship was anchored in the sea, a few nautical miles away from NMPT.
Abraham Kuhan, a native of Ghana who is the cpatain of the ship
declined technical help saying that they were able to set the snag
right.

Thousands of people who had thronged to the place however were of the
opinion that Coastal Guards proved inefficient in the rescue
operations. It was largely owing to the efforts and initiatives of
local fishermen that rest of the crew were saved and brought safely to
the shores.

The final reports reaching Daijiworld office have confirmed that out
of the 5 persons missing in the sea from the sunken Eritrean ship
‘DenDen’ 4 have been rescued while one is still missing. Dakshina
Kannada SP B Dayanand while speaking to Daijiworld over the phone
confirmed 21 have been rescued, one is missing while two died earlier.

gCaptain will be covering the story HERE as details emerge.

Catch the amazing photos and video of the grounding HERE 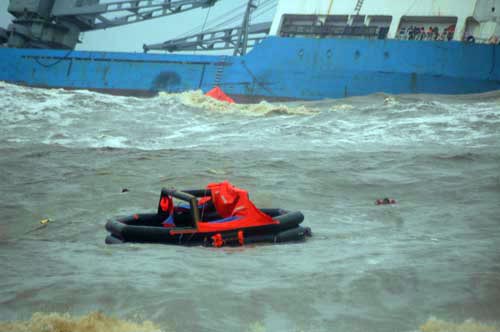 Mangalore, Jul 5: The salvage operations on the capsized Eritrean freighter m.v. Denden off the Thaneerbavi coast near here has been delayed due to bad weather. The operations, which require about three days, will begin as soon as the weather allows.

A meeting attended by a team of salvagers, port authorities, district officials, Karnataka State Pollution Control Board officials, protection and indemnity club members and maritime engineers at the New Mangalore Port on Wednesday decided to wait for better weather.

It was decided that the fuel tanks of the ship should be emptied first in a shore-based ‘hot tap’ operation, which calls for pumping out marine diesel and furnace oil. Deputy Conservator of the New Mangalore Port K.V. Vaswani said the hot tap process involves fixing of a tap to the hull of the capsized ship and draining out the fuel using high-power pumps that will be kept on the shore.

According to sources in Svitzer Wijsmuller, a salvage company based in the Netherlands, the basic objective is to pump out the fuel without causing environmental damage.

Find all of their excellent coverage of this story HERE

UPDATE: We have a new post on this story which can be found HERE