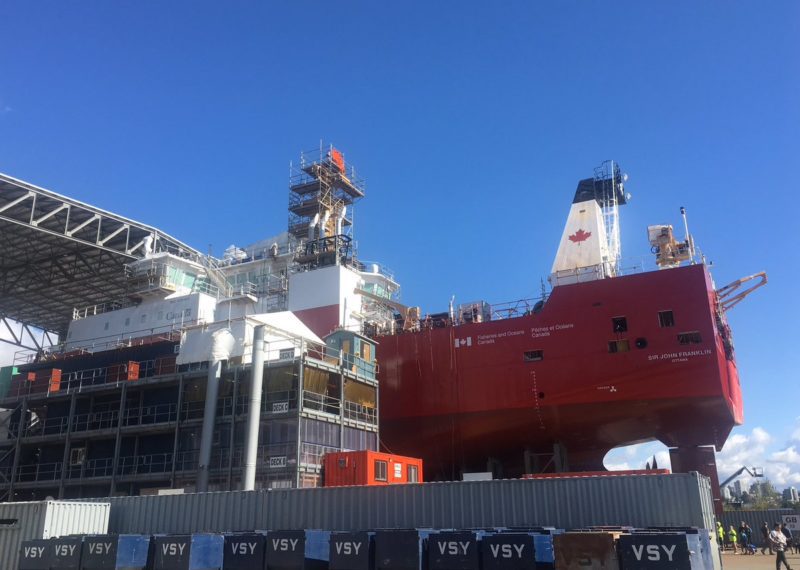 More than 3,300 Canadians attended the unveiling of the first large vessel to built in Canada as part the National Shipbuilding Strategy (NSS) at Seaspan’s Vancouver Shipyards this weekend.

“Today is a historic day for the women and men of Seaspan Shipyards as we deliver on our commitments to the Canadian Coast Guard and Royal Canadian Navy,” said Brian Carter, President & CEO – Seaspan Shipyards. “In the unveiling of the first Offshore Fisheries Science Vessel, we are affirming our long-term commitment to Canada and our leading role in the growth of a West Coast center of excellence in shipbuilding and ship repair.”

In addition to the unveiling of OFSV 1, guests also got a firsthand look at the progress of OFSVs 2 and 3 and received a series of guided facility demonstrations, which included an up-close look at ‘Big Blue’ – Canada’s largest permanent gantry crane.

In October 2011, the Government of Canada awarded Seaspan’s Vancouver Shipyards the contract to build Canada’s Non-Combat vessels for the Canadian Coast Guard and Royal Canadian Navy. Seaspan Shipyards will spend millions this year with Canadian suppliers, and has to-date committed to spending more than $500 million across its supply chain on NSS-related work.

The first ship as part of the National Shipbuilding Strategy (NSPS) will be named CCGS Sir John Franklin in honor of a British Royal Navy officer and explorer of the Arctic. In total, Seaspan will construct three OFSVs, one Offshore Oceanographic Science Vessel (OOSV), two Joint Support Ships (JSS), one Polar Icebreaker (PIB) as well as up to five Medium Endurance Multi-Tasked Vessels (MEMTVs) and up to five Offshore Patrol Vessels (OPVs).

“It is indeed a privilege to be present to witness the unveiling of the first vessel to be delivered under the Government of Canada’s National Shipbuilding Strategy,” said Jonathan Wilkinson, Member of Parliament for North Vancouver and Parliamentary Secretary to the Minister of the Environment. “The construction of this Offshore Fisheries Science Vessel represents a significant milestone in our government’s effort to revitalize Canadian shipyards and construct vessels for the Navy and Coast Guard. The National Shipbuilding Strategy continues to made a significant impact in local economies including right here in my home of North Vancouver. Seaspan itself is not only a major employer in North Vancouver and the Lower Mainland but is also a very important part of our community.”

“Seaspan Shipyards has created a state-of-the-art shipbuilding facility that will be producing vessels for Canada’s coast guard and navy for years to come,” said B.C. Minister of Jobs, Trade and Technology Bruce Ralston. “The company’s investments are creating well-paying jobs not only in North Vancouver, but also in Victoria, the Lower Mainland and across Canada through its marine supply chain. Congratulations to Seaspan on this first of several milestones under the National Shipbuilding Strategy.”

Join the 67,362 members that receive our newsletter.