The controversial new dwell time fees, which were set to start Monday at the ports of Los Angeles and Long Beach, have been postponed as more 48,000 containers are dwelling past the time limit. Ports says progress has been made.

Beginning today, the neighboring ports at the San Pedro Bay Port Complex, which combined handle about 40% of the nation’s containerized imports, were expected to begin assessing the “Container Excess Dwell Fee,” a cumulative per day charge to ocean carriers for lingering import containers at marine terminals.

The ports say the penalties will help clear terminals of backed up cargo amid record volumes and ship backlogs. Revenue collected by the ports, which could easily reach into the tens of millions, are supposed to be re-invested into “programs designed to enhance efficiency, accelerate cargo velocity, and address congestion impacts,” but the ports say that making money is not the primary goal.

According to the Port of Los Angeles’ import dwell time report from Friday, there were 5,985 containers sitting at terminals for 9 to 12 days and a whopping 20,426 containers sitting at terminals for 13 or more days. Although the number of dwelling containers appears to be trending down (as of Nov. 1 there were over 31,000 containers dwelling for 13 or more days), between the two remain over 26,000 containers that would be subject to the fee. This means the Port of Los Angeles alone appears set to dish out $2.6 million in fines on day one of new policy, while increasing them amount each day a container is not removed.

At the Port of Long Beach, the numbers are equally startling. As of Friday, the port reported 17,314 truck-bound import containers sitting 9 or more days and 575 rail-bound containers, so there we’re looking at nearly 18,000 containers that will be assessed the $100 fee on the first day the new policy is implemented. (Updated numbers from both ports are included at the bottom of this post).

What’s not clear is how long are containers are lingering since Port of Los Angeles only discloses a 13+ number, while Long Beach highest number is 9+. We don’t know how many containers have lingered 14, 15, 16, 17 or more days.

Maersk addressed the fees in an update to customers on Friday saying it was aggressively working on developing solutions for customers, including securing additional land-side storage outside of marine terminals.

Who ultimately pays the fee is another issue. While the fee will be charged to the ocean carrier (even though cargo has already been removed from their ships), any penalties will ultimately be passed to the shipper (not the shipping company, but cargo owner) and therefore the consumer.

Q: Who is responsible for paying this fee?

A: This Excessive Dwell Fee shall be billed directly to the Ocean Carrier under whose bill of lading a Container subject to the fee was discharged…” This means that the Ports are submitting the bill to Ocean Carriers to act as collection agent to charge those with a cargo interest in the laden import containers.

Q: As a customer of Maersk, should my container exceed the defined dwell times, will I be billed this fee?

A: Yes, should your container not be removed beyond the defined dwell times, Maersk will pass this cost onto all customers as the owner of the cargo that is dwelling on the terminal, resulting in the fee from the Ports.

While here we offer Maersk as just one example, other carriers are almost certain to the follow the same model.

Ultimately, it’s the Los Angeles and Long Beach port authorities who control and assess the fees, but the program was developed in coordination with the Biden-Harris Supply Chain Disruptions Task Force, U.S. Department of Transportation and “multiple supply chain stakeholders.” So, if you’re thinking the government will swoop in and end the program, don’t count on it. It’s up to the ports.

The ports also maintain that they have no interest in using the policy as a means to generate revenue. As stated in a Port of Los Angeles presentation on the program:

Remember, these fees will be on top of freight rates that have soared as much as 10 times during the pandemic, standard detention and demurrage fees charged by carriers, and all-time low schedule reliability. This is all to say, shippers are paying more for worse service.

It will be interesting to see what happens from here… How much will the charges amount to? Will the fees actually help move cargo more quickly, as advertised? How will shippers respond? We’re in uncharted waters here, so it’s really anyone’s guess.

It appears the number of dwelling containers actually rose at both ports over the weekend. Combined, more than 48,000 containers are now past the allowable dwelling times and subject to the $100 fines:

Join the 74,324 members that receive our newsletter.

The ports of Los Angeles and Long Beach announced Monday that they will delay their controversial container dwell fee directed as ocean carriers until November 22, bringing a sigh of... 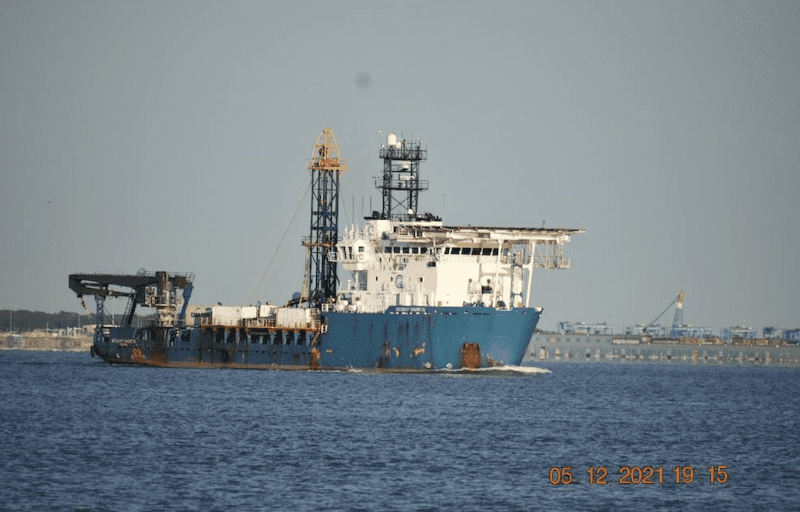 The Offshore Marine Service Association (OMSA) has made its latest accusation of Jones Act violations, this time involving a foreign ship of “illegally” transporting cargo off Virginia in support of... Shipping Containers Get Foldable Design Seen as Cure for Logjams

By Augusta Saraiva (Bloomberg) — Few tools of the global economy have survived without major innovations as long as the shipping container. The supply ructions around the world are presenting an...