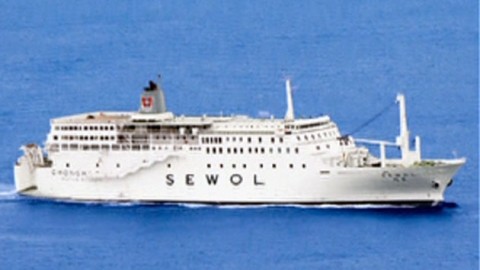 Update: Nearly 300 people are believed to be either missing or unaccounted for, according to media reports citing officials.

Earlier: A 6825 gross ton RoRo ship carrying 471 passengers has capsized this morning off South Korea while sailing from Incheon to Jeju Island. The ship began taking on water about 20 miles offshore Jeolla Province.

More than 190 have been rescued so far according to local news reports.

Unconfirmed reports indicate the crew ordered passengers to jump into the sea in a broadcast saying:”Sinking is now imminent, passengers who are remaining at the ship, please jump to the sea right now.”

If you speak Korean, here’s a live feed from news station YTN:

Screen shots from the news feed of the capsized vessel: