Immediately off the shoreline from Portland Head Light, the iconic lighthouse that marks the tip of Cape Elizabeth, Maine, NOAA’s research vessel Ferdinand R. Hassler has been pinging away with her multibeam echo sounder and side scan sonar in order to gather new data to update local nautical charts.

NOAA says in 2015, Hassler will survey the areas from Fletcher Neck to Moody Beach, and from Taylor Reef to Woody Island, which are heavily trafficked by commercial fishermen and are priority areas for NOAA chart updates.  Last year, the ship surveyed portions of the seafloor from offshore Isle of Shoals north to Kennebunkport.

The following image reveals the bottom of the Gulf of Maine as it has never been seen before. Deep scrapes left behind by glaciers from the last ice age are clearly visible, providing a bit of perspective to the 2-dimensional soundings on the nautical chart. 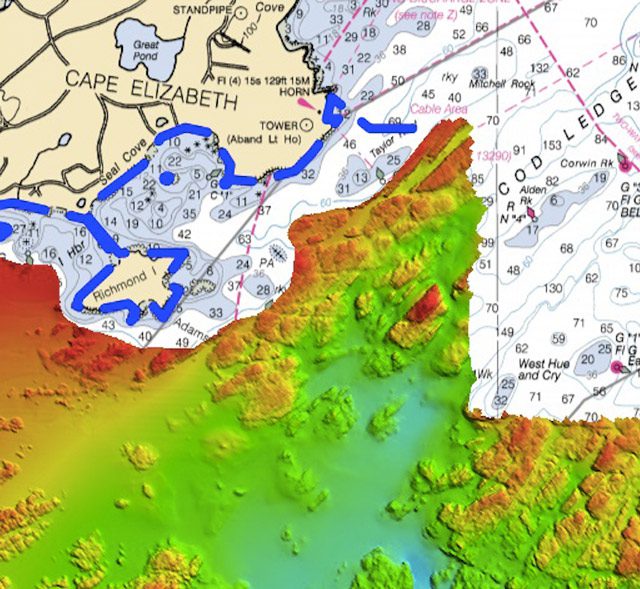 The above data has been gathered since early January amidst truly dismal conditions as record snowfall blanketed the ship.

Looking ahead, NOAA says they will conduct a similar survey in the western part of Penobscot Bay in 2016 and in 2017, they will survey the western portion of Casco Bay, which includes the shipping lanes into Portland.