Welcome to this weeks edition of Maritime Monday.

While this is the first edition posted at gCaptain, this is the 99th edition of Maritime Monday. You can find links to all the previous editions at the bottom of this post. To stay informed all week long, be sure to check out gCaptain’s Discoverer site and vote for your favorite stories as well as add ones that you find.

This Weeks Photos:
This weeks photos are courtesy of my good friend Kami, who writes:

This is kind of a big deal. Especially if you are from Norway. I just witnessed the first discharge of LNG (liquid natural gas, the stuff that when gasified becomes the natural gas we have in our homes).

Here are some more details as covered by Marine Norway:

The first cargo of gas from the Norwegian continental shelf arrived in the USA on 21 February. This shipment of SnÃ¸hvit LNG is the first delivery of gas from Europe to the world’s largest energy market.

The LNG carrier Arctic Discoverer docked at the Cove Point gas import terminal in the state of Maryland, south of Washington DC, at around 14:30 p.m. local time yesterday, after a voyage of 12 days across the Atlantic ocean. Its cargo comes from the world’s most northerly export facility for LNG (Liquefied Natural Gas) at MelkÃ¸ya outside Hammerfest in Finnmark. 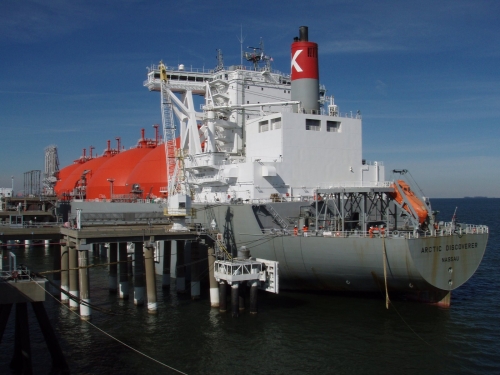 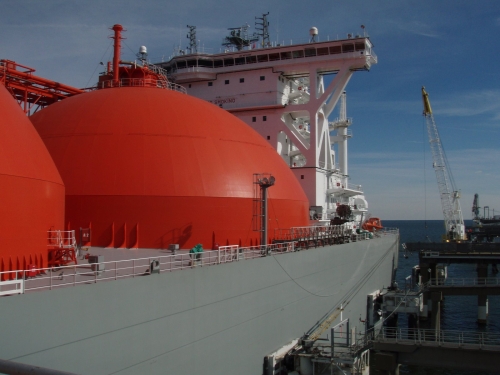 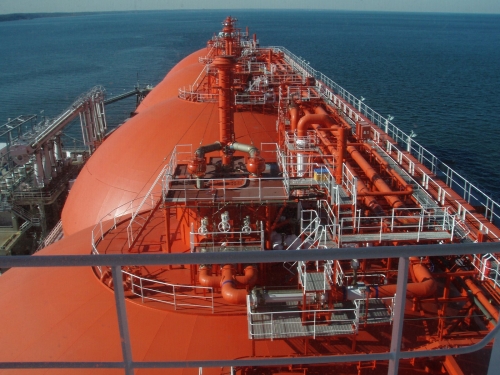 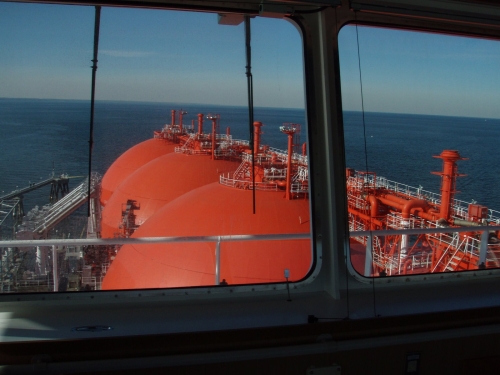 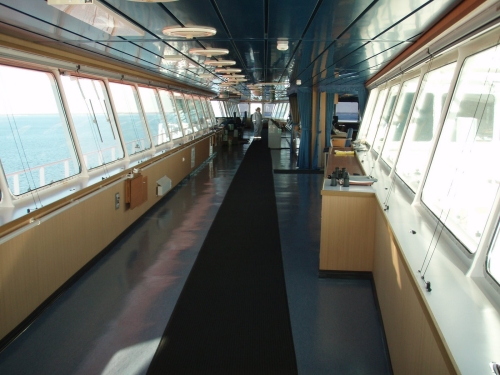 Click on the image below for more details about LNG: 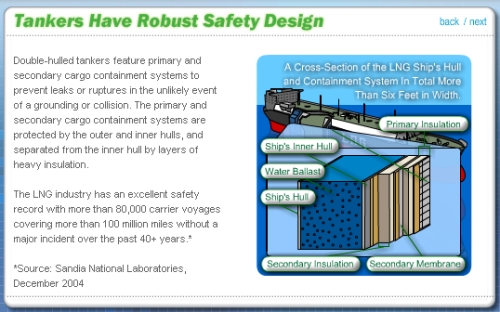 Also, be sure to check out Maritime Monday 36 which has photos of the Statoil LNG carrier ARCTIC PRINCESS, a tank diagram and Statoil’s presentation ‘The Long Road to LNG’ which gives an overview of an LNG plant.

EagleSpeak has “Tsunami buoys ‘need pirate protection’“. (Because nothing is safe in the third-world.)

Also be sure to check out the latest edition of EagleSpeak‘s weekly series “Sunday Ship History: The Aleutians Campaign“

Also be sure to check out Chaotic Synaptic Activity‘s weekly series Monday Maritime Matters which in last week’s edition he covered US Navy Diver Robert Stethem and the ship named in his honor. (Check his homepage for this week’s edition once he gets it posted.)

Scandinavian Shipping Gazette covers the Danish Maritime Authority’s closing of their case against the officers of the DANICA WHITE without pressing charges, in relation to the vessel’s hijacking off Somalia. It sounds like they are sweeping this incident under the rug to avoid any scrutiny that might be pointed in their direction. Read my post ‘Danica White Hijacking – ‘Minimum Safe Manning’ Partly to Blame?‘ for more details.

CDR Salamander covers the 1852 sinking of the HM TROOPSHIP BIRKENHEAD whose actions of the soldiers onboard gave birth to the phrase “women and children first”.

gCaptain has “A Word On Vessel Traffic Service”

The BBC has “North Korea detains Russian ship” The ship is the LIDIA DEMECH. Let’s see how much cargo is confiscated before they release it.

Marine Buzz has “In the Oceans, Underwater Noise Pollution is as Harmful as Oil Pollution“

Sea * Fever has “Sunday Sea-Fever Style: Living in a shell”

The UK’s Director-General of the Chamber of Shipping, Mark Brownrigg, responds to the Guardian (UK)’s piece on ship CO2 emissions in “Don’t compare us to aviation. Shipping is carbon-friendly“

Perhaps we should park all the ships and send the trade by air? That would be a catastrophe for the environment – as well as a physical impossibility! Air freight produces 100 times as much CO2 per tonne kilometre. Such a move would quadruple total man-made CO2 emissions. This is a measure of the carbon-friendly nature of the shipping industry – although the industry is far from complacent and continues to work to reduce CO2 output.

Kiwi at Sea Scrubs the ship clean. You can tell that he is on a new ship as he makes no mention of OSPHO.

KurauKing’s Klang Journal provides a photo tour of Port Klang from the sea. I linked to part four which links back to the first three parts.

National Geographic for its 22 February Photo of the Day has Pearl Station and Reef, French Polynesia, 1996 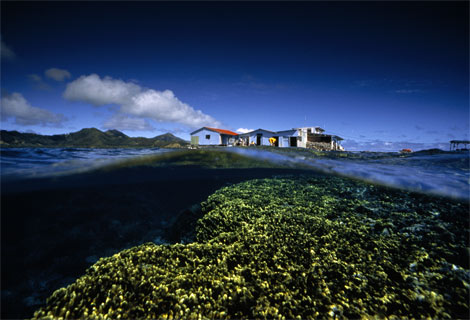 Hellenic Shipping News has “Credit crunch in US, Europe could hit new shipbuilding contracts” and “Shipping to contribute almost 17 billion euros to Hellenic economy in 2007“

MarEx Newsletter covers the declaration by the The Norwegian Shipowners’ Association that it has ‘lifted its recommendation not to use the Liberian ship registry, which has been in effect since 2001.’

Maritime Compass covers the search for an expert on Irving Johnson.

Lloyd’s List Newsroom Blog has “High and dry“, covering the abandonment of seafarers in foreign ports.

Freaque Waves covers the death of people due to freak waves washing ashore.

The Horse’s Mouth has impressive wreck & rescue video in “Hanging Out On A Capsized Triamaran.“

International Law Reporter has “Current Prospects for UNCLOS” concerning chances that the US will adopt the Convention this year.

Mr. Boat Blog has “Dubai to Build Massive Artificial Reef; ‘A Surfers’ Paradise’.” Why do I think that the UAE ‘Palms’ are going to be the world’s most impressive ghost town/housing market bubble.

Mercopress has “One Norwegian equals 20 Chileans in salmon industry“

Tugster has photos of “Random Ships 3”

Normally, it is the Coast Guard that has the upper hand on Merchant Mariners, which is understandable considering that they not only license them but they also come around inspecting their workplace all the time, not to mention showing up every time you make a mistake. However, Tidewater Musings is trying to figure out how to handle former Merchant Mariner Eric Shine, who for some reason is on a mad mission against the Coast Guard. Mr. Shine has also managed to tick off The Coast Guard Report. It seems that a common problem amongst the CG sites is that nobody can figure out what his issue with the CG is. Either they are part of a massive cover-up or they really respect privacy over there in the Coast Guard, because if anyone has looked into his files, they aren’t sharing. (And no, I am not suggesting that they should!)

MARAD – A Vision for the 21st Century – The Maritime Administration (MARAD) issued a concept paper – A Vision for the 21st Century – discussing the future of the US Marine Transportation System. Note: If you have difficulty accessing the document directly, go to MARAD and scroll down the page. (2/19/08). – Dennis Bryant Holland & Knight homepage (Used with Permission)

The report includes this illustration of the possible fuel savings by shifting movement of cargo by water from highways and rail: 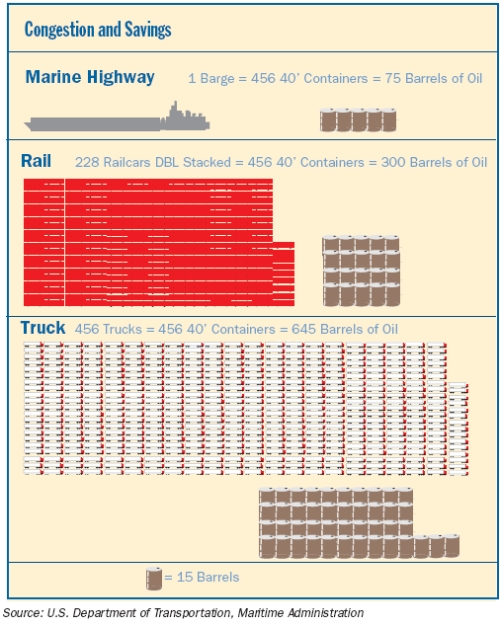 China’s maritime toll revealed – SHANGHAI 20 February – The wreck of the Chinese bulker Jinshan, which sank two days ago north of the Philippines, has not been discovered yet. Of the 28 seamen aboard, 26 were rescued from their life boat by a passing tanker. The ship’s captain and chief engineer stayed on board and are feared to have gone down with it. Rumours of an accompanying oil spill are being denied by Philippine authorities. Closer to China, a fishing boat from Fuzhou province has gone missing north of Taiwan, with all of its eight crew presumed drowned. Despite an extensive search effort, no trace has yet been found. China’s State Bureau of Oceanic Administration today announced that in 2007 natural, sea-related disasters have caused Rmb8.8bn ($1.2bn) of economic loss and 161 casualties. Last year 8,560 vessels of all shapes and sizes sank or were heavily damaged along the coastal provinces, with 18 people lost. Zhejiang and Liaoning provinces were hit hardest. – Fairplay Homepage (Used with Permission)

Please submit articles for inclusion in next week’s edition using the following submit form at Blog Carnival. You are also welcome to email stories and photos to [email protected] for inclusion in future editions as well as suggest area of coverage.

Previous Editions:
As linked below or click on the label ‘MaritimeMonday’.