The following is posted by Fred Fry: (Note: I am still in Finland)

Welcome to this 115th edition of Maritime Monday.

This week’s photos come from the website of Aker Yards ASA: 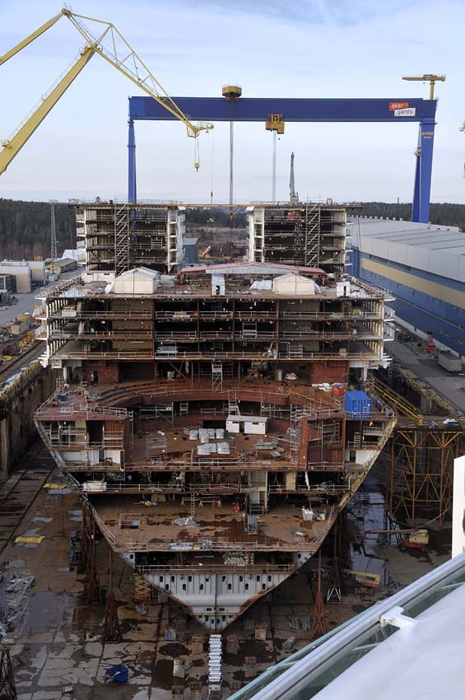 GENESIS I under construction You can find more photos here.

EagleSpeak has “RAND Does Piracy” and also has a follow-up “Piracy Definitions” in response to input from the International Maritime Bureau.

gCaptain has “The Success Rate Of Modern Pirates” and the amazing “Incident Photo Of The Week – Jumbo Crane Collapse“. The accident happened in China and the massive crane collapse has killed at least 36 workers. Go see the photo and read the story.

The Destroyermen cover their rescue of Somali migrants in dire need of assistance in “USS Russell Assists Vessel in Distress” and “More Somali Rescue Photos“. The American Spectator has “Stephen Hopkins vs. the Germans” noting ‘This is the story of a forgotten ship with a prosaic name. But when I came across it accidentally in the course of some other research I thought it a story that it would be good for America to be reminded of. And, possibly, good for America’s enemies to be reminded of, too.’ Go read it if you are not familiar with the heroics of Cadet Edwin O’Hara and the rest of the merchant sailors and Navy Guard onboard the Liberty Ship STEPHEN HOPKINS when they had the misfortune of running into a German armed cruiser. After reading the story, go and read the ‘Reader Mail‘ comments on the story.

ABC News has “Crew Abandons Sinking Ship, Leaves Teens“. There were over 100 teens and over 200 people onboard diving vessel authorized to carry only 80. One died. This happened off Cancun. (Found on Professional Mariner)

EU Referendum has “The worst of the worst” covering the worst-ever crisis for the UK’s fishing industry.

thisishampshire.net has murder charges for four UK teenagers in the beating death of a merchant seaman in “Attack on sailors – fifth teen charged“. It seems that teenagers attacking adults is the newest cool thing to do, both in Washington, DC and the UK. In Finland a group of 100 teens at an open concert suddenly attacked the police stationed at the event. So be aware of your surroundings. (and when in doubt, strike first. It might be your only opportunity to ‘hit back’.)

CDR Salamander has a must-watch Navy video in “My Navy“. Be sure to read the comments as well.

Christiaan Conover has the 2009 Massachusetts Maritime Academy school ship ‘Sea Term’ ports of call noting that high fuel costs have limited their voyage to the Caribbean.

Wikipedia has the history of the first single-handed round the world sailing race: the Sunday Times Golden Globe Race. Nine entered, only one finished, and one, Donald Crowhurst, committed suicide near the end of the race, after hanging out off South America in an attempt to fake sailing around the world. He killed himself after going mad with the realization that he was going to win and his deception was going to be found out. The winner of the race, Robin Knox-Johnston, was covered in Maritime Monday 51 for being stupid during a recent solo round the world race.

Life at SEA returns from sea to post a detailed look at “Future Ships : The new age of sail” and also has “When Women Turn Pirate“.

Helsingin Sanomat also has “Luxury private yacht draws onlookers to Katajanokka“. It is owned by Russian billionaire Roman Abramovich. The yacht seems to be getting lots of press coverage as gCaptain also covered the yacht as it also recently visited St. Petersburg Russia.

Notwithstanding the National Transportation Safety Board’s recent, callous and casual disclosures of the most intimate details of pilot John Cota’s life, the counterclaim alleges that the pilot was medically unfit and incompetent to perform the duties required by his United States Coast Guard license. If the ship owner can demonstrate this accusation to the satisfaction of judge or jury, then they also may be on their way to getting off the hook. The irony of this situation may rest in the fact that the NTSB has already done most of the hard work that will be necessary to do just that.

I have to say that I was initially dismissive of the Shipowner’s claim, but after reading this article I better understand the argument and agree that they have made a good point. Something tells me that the public disclosure of the pilot’s medical details will probably allow him to collect damages as well.

blue water: news of my escape asks “Why it is that people think that they should pay a scientist less than they would a green deckhand on a tugboat?“

Bob Couttie’s Maritime Accident Casebook has the amazing story of the failure of all of a vessel’s GPS units (8 of them!) in “The Zombie GPS“

THE PRIVATE ISLANDS BLOG has a real life “Robinson Crusoe Seeks Girl Friday” So, you might want to consider clicking the link, if you are a lady looking for a man who owns his own island off Australia.

Tugster has photos of “A Barge Company“

Mr. Boat Blog has “Shipping a boat” by cargo plane. It is a large sailboat.

Alibris booksellers has a copy of “South from Corregidor” available for $15. A second copy is available for $50. I finally got my copy (with dust jacket) for the bargain price of $9 on eBay. It only took 6 months of hunting. I am currently reading FAREWELL MILAG, which is the story of Merchant seaman Arthur C. Bird concerning his capture by the German Raider KOMET in the Pacific and of his escape from the German Prison Camp MILAG for merchant seamen. He was the only one to ever successfully escape from the camp. I am about halfway through the book and it is a good read so far. Alibris has a number of affordable copies available. So get yourself a copy if you like good sea stories. (Post a comment if you manage to get one of these books.)

Freaque Waves has a reminder in “another variation of onshore freaque wave tragedy.” Waves not only hit ships. They eventually strike beaches.

MarineBuzz has “Ships as Floating Sources of Knowledge, Help and Hope” which notes that the ‘MV Doulos was constructed in 1914 (94 years old) in USA and is recognized in the Guinness Book of World Records as the world’s oldest active ocean-going passenger ship.’

Lloyd’s List Newsroom Blog notes problems with ports in Europe taking the 100% US bound cargo scanning seriously due to the limited cargo that they are sending to the US not justifying the cost wondering if it is shortsighted thinking.

cruisedirect.co.uk has “Crossing the Panama Canal is an Expensive Business for Disney Cruise line” and provides numbers which indicates that it costs a couple hundred dollars per stateroom to transit the canal. So I guess you should be awake and on deck for the entire transit to enjoy it since you paid for it.

Iran VLCC mystery – IRAN is thought to be hiding 14 VLCCs near an oil loading facility in Kharg Island, claimed today’s Iran Daily. The newspaper also publishes speculation that the Iranians are storing oil in the 14 VLCCs. By keeping those VLCCs out of the market, international tanker freight rates would be borne up both in the VLCC range and in other size ranges as charterers would be forced to cargo-split into Suezmaxes and Aframaxes owing to a current general scarcity of VLCCs.

The newspaper also reports three tankers have been chartered. Fairplay contacted the National Iranian Tanker Company (NITC) but no one was available for comment.

Research on AISLive.com today reveals that four NITC tankers were at anchorage around Kharg. These were the Damavand, the Daylam, the Huwayzeh and the Hoda.

There was also one Malaysian flagged VLCC, the Maliau, which is owned, managed and operated by Gagasan Carriers. – Fairplay Homepage (Used with Permission)

Join the 82,664 members that receive our newsletter.