Welcome to this 110th edition of Maritime Monday. Atlantska has continually advised our web page readers of newbuilding events and, on this occasion, it is our pleasure to announce that on Saturday, November 3rd 2007, at 11,45 hrs local Chinese time, that is, 5,45 local Croatian time, yet another newbuilding was launched by Jiangsu Eastern Shipyard for our company. – Link 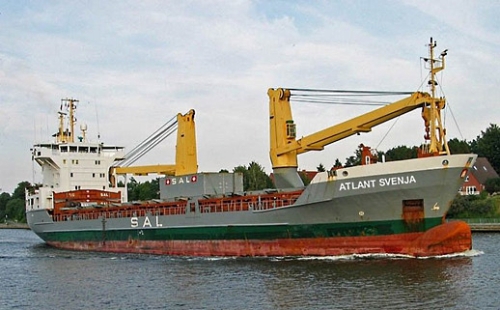 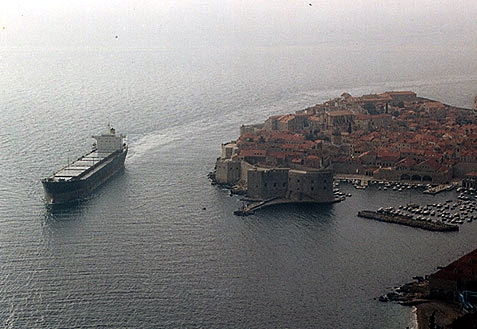 Chaotic Synaptic Activity has for his weekly series ‘Monday Maritime Matters’ a pointer back to the story of CDR George Rentz, USN, Chaplin Corps who gave his life to save another.

Did you miss the PBS documentary CARRIER? Well you’re in luck as they were kind enough to post the full series of the posted online here. Don’t have time for the full series, then check out Episode 5, Chapter 4 which covers Maritime Security and includes a vessel boarding and search.

gCaptain has “Incident Photo Of The Week – Lifeboat Bottle Explosion“. Simply amazing and dangerous and all in a survival craft.

gCaptain also has “Mass Evacuation Of European Cruise Ship“. The ship is the MONA LISA.

Helsingin Sanomat has “GTS Finnjet headed for breaker’s yard“. US shipbrokers notes on the vessel’s details page that the buyers are willing to resell the vessel to any buyer willing to save the vessel from scrapping. Of course, it is a limited time offer. (FYI, GTS = Gas Turbine Ship) 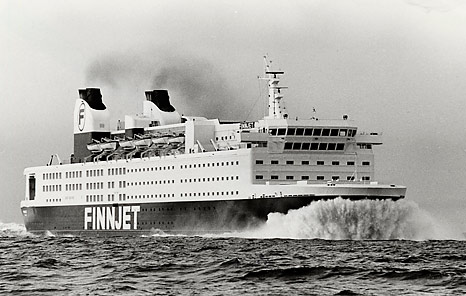 Authorities detained the group, including nine children, overnight on the island of Evia, just off central Greece where they had been put ashore by yacht, a Merchant Marine Ministry statement said.

Three suspected smugglers from a U.S.-flagged yacht offshore, and two on land were arrested, the statement said.

Never Sea Land has “Britain’s anti-piracy measures” as the UK targets one of it’s own who is flying a pirate flag at home.

I comment on my blog Fred Fry International about the recent West Coast ILWU port walkout and note that this is not the first time that West Coast longshoremen have been a security threat to military operations. EU Referendum explains how the European Union is using the UN’s Law of the Sea Convention to strip African Waters of fish. The relevant clause is one reason why the US should continue to reject the treaty unless we want the international community to decide if we are extracting all we can from our waters or not. (They could probably make a strong argument that more fishing can be done off Alaska.) Looking at the completely devastated EU fisheries, they are the last group, other than the UN, who should have any say in managing global fishing stocks. Unfortunately, by the time their actions are properly reflected in their reputation, it will be too late to correct the problem.

The Pilot Boat has photos of moving the Swedish chemical tanker BRO PRIORITY to drydock.

Lloyd’s List Newsroom Blog has “Lighthouses under spotlight“. The problem for the UK region is not lack of attention, but too much, due to multiple authorities

Sea * Fever has an update to the search for two suspicious people sighted on a Washington State Ferry in “Maritime Terrorists? No, Maritime Tourists.“. MM Reader Squire Verstas emailed me a link to Bruce Schneier which also covered this story here with lots of reader comments.

BitterEnd has a rescue and makes a good point about one source of water ingress and a possible simple solution to reduce the rate of flooding.

Pilot/Photographer OneEighteen has a great photo titled “Ships Passing at Night”. It is my new desktop image.

Christiaan Conover has a photo of Nobska Light in the Fog.

MarineBuzz has “Indian Naval Ships Rush to Cyclone Nargis Battered Myanmar“. Unfortunately, this is probably in vain. On the bright side for the military leadership in Myanmar is that none of them spilled any oil in San Francisco Harbor, so they will probably avoid being charged with ‘Crimes Against Humanity’.

MarineBuzz also has “How Seafarers can Overcome Fatigue ?“. The easiest way is to add more seafarers to the ships, but that is not an option available to the seafarers themselves.

Those who don’t mind sailing on a Government survey ship were surely jealous of Kiwi At Sea for getting a job on the new JAMES COOK. Well he signed off recently and now finds himself unemployed, due to some unnamed administrative issue.

Tugster has photos of “Small Tankships“.

The Destroyermen has photos of “Muster All Hands For Stores Strike Down” explaining the terms for various forms of underway replenishment.

blue water: news of my escape touches on ‘the group psychology of a commercial ship’ in “ship’s business“.

The UK’s Maritime and Coastguard Agency has a pair of stories of people ashore who should have stayed ashore in “The Madness of Tombstoning Returns to Devon” and “Drink and Stupidity Lead to Two in the Water At Studland“. Stupidity is not illegal but it might get you killed.

Mr. Boat Blog has coverage of a future rescue/loss at sea; A ‘single handed race around the world in ten foot boats‘ race. Around the world solo races are incredibly irresponsible. Doing it on a boat only 10 feet long is just asking for it. A whale can probably swallow the boat whole. I predict multiple casualties. Dead Pool anyone?

Shirlaw News Group has “Canadian yacht rescued by ARA east of Falklands“. This was a solo sailing attempt gone bad. Actually, the sailor was saved, but the boat was not.

Hello Estonia has “Extension of Muuga container terminal to cost EUR 55 Million“. What is China doing in Estonia? The article is not clear about that.

Molten Eagle has “Submarine Design and the Strategic ‘Global Warming’ Chicken Game “. Are we going to need ice-capable subs in the future?

Kauai Garden News has SuperFerry’s new CEO’s decision that any return of SuperFerry service to Kauai would first require a signal from the island that their service is desired. There are a couple of amusing comments from Island politicians who refuse to express any sort of green-light, most likely out of fear of a minority of their constituents.

Greenpeace has “Fish laundering in the Pacific“.

Bellona has “Rosatom takeover looms for Russia’s nuclear icebreaker fleet“. Maybe they should park those nuclear-powered ships until they clean up the mess they made already with them and many others.

Kennebec Captain has “Guidelines For Avoiding Hurricanes At Sea“.

The award recognizes the extraordinary seamanship of the Horizon Falcon officers and crew in the rescue of two seamen from a Panamanian-flagged ship after it sank in typhoon-heavy seas northwest of Guam in July.

Education Today has “In Stormy Job Market, Many Train For Jobs At Sea” in a story about the Paul Hall Center for Maritime Training and Education, in Piney Point, Maryland.

The TRITON-megayacht News has “Preparedness is the key to halting perils such as fire“.

SignOnSanDiego has “Navy vessels are set to embark on two humanitarian missions “. The ships are the hospital ship USNS MERCY and the amphibious assault ship BOXER.

America’s Port has “The death-defying duties of port pilots“.

Last of the Few has a photo posted in “I have heard of bathtub racing…but this is a whole new sport!!!“.

The Washington Times cover’s the Flag of Convenience that North Korea turns to in “Ships of fools?“. The flag-state is Mongolia, a land-locked country.

NTSB – safety recommendations re INS/IBS and VDR – Following up on its investigation of the heeling incident involving a cruise ship, the National Transportation Safety Board (NTSB) has recommended to the Coast Guard that it ask the IMO to make training in integrated navigation systems (INSs) and integrated bridge systems (IBSs) mandatory and that the recordings of voyage data recorders (VDRs) of heel angles be made complete throughout the range of possible values. Safety Recommendations M-08-1 and 2 (5/2/08). – Dennis Bryant Holland & Knight homepage (Used with Permission)

CONTAINERS must be weighed if the problem of lost boxes is to be solved, believes Jan-Olaf Probst, vice president in Germanischer Lloyd’s newbuilding division. Speaking to dinner guests in London yesterday, he presented initial findings from a joint industry project that had been prompted by four incidents in the Bay of Biscay in February 2006 in which boxes had been lost overboard and showed dramatic pictures of how container stacks can move in even moderate sea conditions. Asked what his recommendation was, he said that boxes should be loaded exactly in accordance with the stowage plan and that owners would make better plans if they had better information about box weights. And for that, he said, the boxes need to be weighed. If airports can weigh luggage, he suggested, ports sghould be able to weigh containers. He also urged that container design should be improved. “It’s still a stupid small box”, he said, adding that even slight damage could weaken them and cause boxes at the bottom of a stack to collapse. Worn corners castings were also a problem, he said, allowing twistlocks to fail. “The box is the limit, not the ship”, he concluded. – Fairplay Homepage (Used with Permission)